During the Cold War, Soviet totalitarianism was loudly condemned by the West. Today, its remnants score invitations to buy arms from Western companies in London. 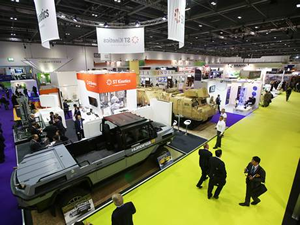 The Defence and Security Equipment International (DSEi) arms fair, currently taking place at the Excel Centre in East London and held every two years, has a long history of controversy.

Two exhibitors were thrown out in 2011 for promoting cluster bombs, the “use, production, transfer or stockpile” of which is illegal in the UK under the Convention on Cluster Munitions. This year, two more companies were expelled from the fair for promoting “illegal torture weapons”, after Caroline Lucas raised the issue in Parliament.

The fair is co-organised by a government department responsible for promoting arms exports abroad, which also decides which foreign governments are invited to DSEi.

This year invitations were sent out to the usual suspects: regimes engaged in violent crackdowns on pro-democracy movements like Bahrain and Saudi Arabia, and others whose security forces have carried out massacres and atrocities, such as Iraq, South Africa and Kazakhstan.

The newest editions to DSEi, however, are quite shocking. The governments of Uzbekistan and Turkmenistan, which to quote Human Rights Watch “stand out as among the most repressive in the world”, were both invited this year. Levels of repression in these countries are “extraordinarily high” and torture is “rampant” and “widespread”.

The methods used are horrifying. In Turkmenistan, detainees have been raped, beaten and forcibly administered psychotropic drugs and electric shocks. In Uzbekistan, political dissidents have had their fingernails pulled out and been boiled alive for daring to speak out against the regime.

Nobody knows the exact number of political prisoners languishing in jail in each country, but in Uzbekistan not all of the repression takes place behind close doors. In 2005, demonstrators gathered in the main square in Andijan to protest about human rights abuses and the lack of socioeconomic opportunities in the former Soviet Republic. After sealing off the square to prevent their escape, security forces opened fire, massacring around 500 people.

To this day, no investigation has been launched and the relatives of survivors continue to face intimidation and harassment from the authorities. British technology was used in the slaughter.

According to Jerome Taylor, writing at the time for The Independent, “the government has failed to close a “massive loophole” in its arms trade laws which allowed the Uzbek authorities to use UK-designed vehicles in the Andijan massacre.” Britain had provided the chassis for the Land Rovers used in the atrocity.

After the invasion of Afghanistan, Uzbekistan became a vital ally in the West’s War on Terror, receiving hundreds of millions of dollars of aid from the Bush administration as well as military training in “marksmanship” from the UK. In 2005, it was even reported by the New York Times that there was “growing evidence that the United States has sent terror suspects to Uzbekistan for detention and interrogation”. The former British ambassador alleges they were tortured.

Today, Human Rights Watch reports that the United States is “deepening its engagement” with the Karimov regime, with Obama recently waiving human rights-sanctions in order to restore military aid to Uzbekistan.

The US government’s own findings render Obama’s decision indefensible. An annual report from the US State Department claims that “Uzbekistan remains one of only a handful of governments around the world that subjects its citizens to forced labor through implementation of state policy”.

According to Human Rights Watch the government continues to force millions of schoolchildren, mainly aged 15 to 17 years old, but some as young as nine, to help with the cotton harvest for up to two months every year. They live in filthy conditions, contract illnesses, miss school, and work daily from early morning until evening for little or no pay.

The Uzbek security services are also alleged to have been behind the attempted assassination of a political dissident in Sweden. This, unfortunately, is the sort of the regime the British government feels it is “sensible” to invite to a major arms fair.

Another is the aforementioned dictatorship in Turkmenistan, whose record is hardly any better. There, a population is kept quiet and compliant by state control of all print and electronic media, travel bans for civil society activists, a pervasive cult of personality surrounding President Berdymukhamedov and the constant fear of arrest and torture for those who speak out.

In this year’s annual report from Freedom House, Turkmenistan, Uzbekistan and another of the British government’s invited guests at DSEi, Saudi Arabia, were among the nine countries described as “the worst of the worst”, scoring “the lowest rating for both political rights and civil liberties.” Assad’s Syria and Kim Jong-un’s North Korea were given the same ranking.

Laughably, foreign office minister Alistair Burt maintains that “respect for democracy” and “fundamental freedoms” are “mandatory considerations” for the government when it decides which countries to invite. Evidently, then, Uzbekistan and Turkmenistan’s wanton violation of such principles was understood, considered and completely ignored.

Before the fall of the USSR, an invitation to DSEi for either regime would have been unthinkable. During the Cold War, Soviet totalitarianism was loudly condemned by the West. Today, its remnants score invitations to buy arms from Western companies in London.