For days, weeks, if not months ahead the reasons why David Cameron lost last night’s vote on Syria will be chewed over by everyone from academics to those at the Dog and Duck meeting for a Friday night pint. 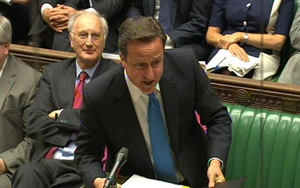 For days, weeks, if not months ahead the reasons why David Cameron lost last night’s vote on Syria will be chewed over by everyone from academics to those at the Dog and Duck meeting for a Friday night pint.

The conference season will take on a new complexion as a result of last night’s decision by the Commons to put the brakes on the path to military engagement, whilst those with much more understanding of the Conservative Party will assess what it all says about Cameron’s ability to connect with and understand the mood of his own backbenchers.

That said, however, the government’s defeat yesterday can be put down ultimately to a muddled, incoherent and at times contradictory strategy adopted by Number 10.

One of the key areas of debate yesterday was around the evidence and the need to allow UN weapons inspectors to be allowed to inspect the site of last week’s attack and report back to the Security Council in New York.

What Cameron managed to do yesterday, however, was expose the muddled thinking and lack of enthusiasm he had for the UN process to continue, fatally undermining his assertion that ministers had learnt the lessons of Iraq.

The reality is that as he was standing at the dispatch box to propose a motion to MPs that called for the weapons inspectors to complete their work and publish the evidence, he was simultaneously pre-empting it by making clear that he felt chemical weapons had been used by the Assad regime.

Why then did Cameron bring forward a motion calling for the evidence to be gathered when he had already made up his mind?

A further curious argument made by David Cameron was that if military action were to be taken it would be in no way about taking sides or another but about ‘simply’ punishing those culpable of the heart wrenching deaths of innocent men, women and children as a result of chemical warfare.

One wondered, however, whether Cameron really believed this. How could it be the case that the west could fire a tonne of cruise missiles to destroy Assad’s military facilities and think that it would have no impact whatsoever on the course of the rest of the conflict?

Where is the moral outrage against those elements of the rebel forces who believe that the rape of 15 year old girl, every day for 15 days by a different person each day, is a legitimate weapon of war.Why has no one publicly declared this, in the words of US secretary of state John Kerry, to be a moral obscenity that requires robust action?

Where is the action to prevent elements of rebel forces repeating their barbaric acts such as those who, having killed a Syrian solider then decided to cut out his heart and eat it?

The red line is flawed

Perhaps most seriously of all, Cameron’s problems can be traced back to his acceptance of Barack Obama’s red line, the US President’s declaration that the use of chemical weapons would be a game changer.

Don’t get me wrong, the use of chemical weapons is despicable and it is beholden on us all to do all we can to prevent their use. But why is it that the West only felt compelled to intervene when we saw children killed as a result of chemical weapons being used?

Why is it that we have sent a message that using chemical weapons will lead to action whilst killing innocent civilians using conventional weapons, such as the massacre seen in Homs, provoked the condemnation but no action?

The chilling signal this gives to despots worldwide is that it is not the deaths of innocent people that matters but how they are killed. I am tempted to suggest that it is tantamount to dancing on the head of a pin since one has to ask what the difference really is between killing an innocent child using a gun and killing them with chemicals. Cold blooded murder is cold blooded murder whatever weapon is used.

8 Responses to “Why Cameron lost the vote on Syria”