A YouGov survey from May 2012 revealed that four out of ten young women had suffered street harassment in the past year. 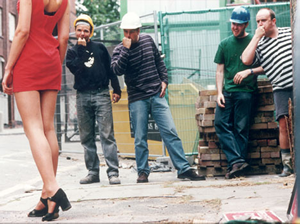 Ask any woman if they like to be cat-called, be patted on the bum or if they think being called ‘honey’ is a charming way to start a conversation on the street.

The answer will be no, and if you think I’m talking common sense then spread the word, as an astonishing number of women* are still subjected to street sexual harassment on a daily basis.

“We’ve gone to this point where women are just sick to death of being treated this way,” says Julia Gray, the co-founder of Hollaback! London, part of an international network aiming to bring street harassment to a close.

Though in-depth research has yet to be carried out to capture the scale of the problem in the UK, a YouGov survey from May 2012 revealed that four out of ten young women had suffered street harassment in the past year.

Thanks to online initiatives like the Everyday Sexism project, women now have a space to share their experiences of abuse and discrimination, and set the record straight. The website received 40,000 entries in just about a year from around the world:

“I was completely taken aback by the viral success of the project,” Laura Bates, the founder of Everyday Sexism, says, “but now I understand that it was because of the desperate need for a space for these stories to be told”.

Laura published many testimonies about street harassment, sometimes from girls as young as seven, and hundreds of posts from young teenagers describing abuse whilst in their school uniforms. “Something so many school age girls described to me as ‘routine’.”

Hollaback! London also receives posts every day. “But that’s just a small portion of people that experience it, go online to find our site and tell their story,” Julia states. “There’s also a huge number of women that don’t ever talk about street harassment because they think that it’s something that comes as part of ‘being a woman’.”

“There is also a fear that the police won’t take victims seriously,” she adds.

The Metropolitan police’s Sapphire unit – that takes care of sexual crimes – came under fire last February, after a report revealed a series of failed investigations. The IPCC also pointed that officers had encouraged victims to withdraw rape claims in Southwark, South London. The unit is now undergoing a major reorganisation.

As a teenager, Raquel, now a 22-year-old Masters student, was groped by a man as she walked out of a tube station in Madrid. She brought her offender to court: “He said that my skirt was too short and he had ‘tripped’ on it,” she recounts, “thankfully, the judge didn’t fall for that.”

“There was a lot of people around when it happened, but it could have been a different story had we been in a quieter place.”

When living in London, Raquel and her flatmates were often followed home at night by men. “No matter what we said, even if we were more people, they would still chase us. We used to take long detours until they would get bored and leave. It was very annoying and tiring.”

Her story is unfortunately far from unique. Female friends have told me how they had been honked at, followed by cars as they were cycling or walking home at night, groped in public transport and flashed by public masturbators.

Last year Sophie Peeters, a Belgian filmmaker, got fed up of having to put up with street harassment. Her documentary Femme de la Rue (Woman of the Street), in which she films men’s reactions as she walks through her neighbourhood in Brussels, threw street harassment in the limelight, and opened up a national debate. Shortly afterwards, the city council decided to crack down on sexist comments and offensive language by introducing fines.

“Street harassment is a universal phenomenon. Hollaback!’s presence in 64 cities and 22 countries proves it,” Quentin, a campaigner from Hollaback! Brussels, says. He is sceptical, however, of the fining system, which is limited to the Belgian capital: “If this type of sanction solved problems, we wouldn’t have any more traffic offences. But it did give street harassment a status in the justice system.”

“The documentary shed a light on a huge problem that had been ignored for years. Victims finally dared to speak out,” he adds. “We can’t however say if it has triggered a major shift in public opinion as we still receive regular accounts of street sexual harassment.”

None of the women I spoke to have ever felt flattered or seduced by an aggressive, threatening or intrusive approach. Most victims of street harassment are left at best feeling puzzled; more often, it makes them feel angry, disgusted and scared.

“Mostly at this point we need social change,” Julia asserts. Her call to arms? “We need to take it from a grassroots perspective: talk to our friends about it, talk to our peers and to our colleagues. The whole attitude that it’s just a compliment is still really prevalent and that’s not ok.”

*Campaigners and statistics available suggest that women are the main victims of street sexual harassment though not exclusively.

4 Responses to “Street harassment is not banter. It makes women feel angry, disgusted and scared”