The revelation that 46 schools have Section 28-like policies is shocking, but there is a broader issue that the education system must do more for LGBT students. 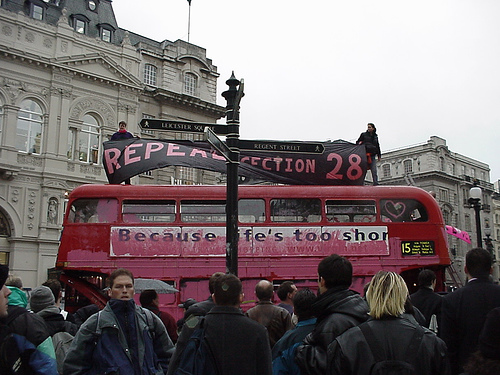 Benjamin Butterworth is a journalist for Gay Times magazine and represents London on Young Labour national committee. He tweets @benjaminbutter

Section 28 is parliamentary history at its stickiest. It may have been introduced 25 years ago, and repealed nine years and 11 months ago, but the whiff of bigotry and small-mindedness it wafted over the Tory party has tarred.

The infamous amendment to the Local Government Act 1988 instructed that local authorities must not ‘promote homosexuality or publish the promotion of homosexuality’, or ‘promote the teaching in any maintained school of the acceptability of homosexuality as a pretended family relationship’.

Not good, then, that a batch load of Free Schools – the flagship of Gove’s ‘education revolution’ – were found to have held onto the shamed policy. The British Humanist Association (BHA) identified 46 schools with policies that salute the late Thatcher ethos.

Among these are three Grace Academies, an academy chain in the West Midlands with a Christian ethos. The chain’s policy, as published on its own website, says it can permit ‘objective discussion of homosexuality’, but that ‘the governing body will not permit the promotion of homosexuality’.

It doesn’t take a person of the Left to recognise the discrimination inherent in these statements. It’s pretty transparent to most, almost all, voters in 2013 that such framings of sexuality are cruel and unnecessary.

Although many of these 46 schools have since removed or revised their sex and relationship education policies, they are just the tip of one gaping, ignorant iceberg lingering around our schools.

Last weekend I attended Young Labour’s inaugural LGBT conference. Young LGBT people from across the country discussed their own negative experiences of school. The tolerance of ‘gay!’ as an insult; the number of questions about non-heterosexual sex left unanswered; the absence of homophobia from anti-bullying policies; the pointlessness of a lesbian taught only about how to put a condom on a banana.

These were people educated in schools without Section 28 style policies in place. Yet they still had to mind the gap between legal acceptance and actual awareness of their own sexuality or gender.

The Department for Education has called out the 46 schools as having ‘unacceptable’ sex and relationship education policies. And so they should. But they should also tackle the ubiquity of schools that fail their students who happen not to be straight or cisgendered. The teachers that turn a blind eye when a classroom is filled with laughter from a joke with gay people at its butt. They should call out the schools that don’t name a place for advice and support for students dealing with sexuality or gender issues. Or fail to explain that homophobia is, like racism, not acceptable on any level.

The return of Section 28 is very worrying, and profoundly wrong of the schools concerned. But what it ought really draw attention to is the broader problem, resident in just about every school, of ignorance toward LGBT needs and issues. These issues didn’t disappear with the Section. The next Labour government should introduce a national curriculum for sex and relationship education, if it really takes tackling LGBT issues in schools seriously.