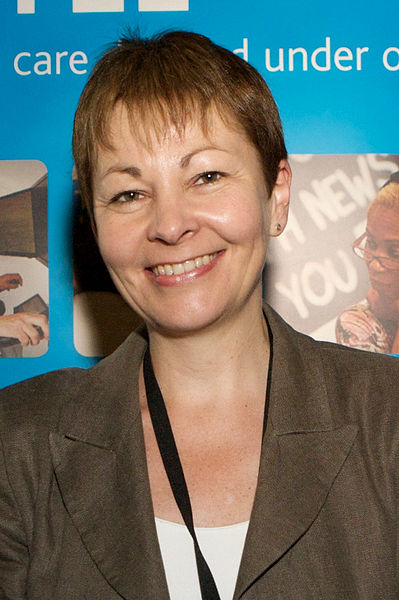 Lewis Coyne is a member of SERA: Labour’s Environment Campaign. He writes here in a personal capacity.

On Tuesday the Green MP Caroline Lucas was released on bail following her arrest in the West Sussex village of Balcombe. Lucas had taken part in Monday’s protest against the exploratory drilling undertaken by fracking company Cuadrilla, who hope to extract oil from the area.

Following her release Lucas said that ‘the government isn’t listening, not just to me but people up and down the country’, and as a result ‘when those democratic means have been exhausted […] it can be legitimate to take non-violent direct action’.

So far Labour have neglected to condone or condemn the action taken in Balcombe, with the exception of MP for Glasgow South Tom Harris who took to Twitter to rather unhelpfully claim that Lucas attended the protest for ‘[p]ure self-promotion’.

Let me offer a less cynical appraisal: good on Caroline Lucas for standing up to a company who seek to profit from a thoroughly destructive practice. Good on her for displaying a genuine passion and conviction so often lacking in our present generation of politicians.

Fracking is an issue which should elicit such a response from our centre-left MPs, because the reality is that we know – and have known for decades – that a fundamental change has to take place in our energy provision and our economy. We must act now; the longer we leave it, the greater the likelihood of irreversible climate change and irreparable damage to the planet.

In 2015 Labour and the Tories will present the electorate with a fundamental choice – do we, like Germany, invest in renewable energy to develop green technology, provide jobs in a sustainable industry, and begin the transition to a low-carbon economy? Or do we, as the Tories would have it, halve corporation tax to encourage a harmful and backward-looking industry which would see us rocket past our carbon reduction targets for 2030?

Cameron and Osborne’s message is clear: frack today, pay tomorrow. Labour’s plan as outlined by Ed Balls is, bar the regrettable advocacy of nuclear power, far more encouraging: ‘the green economy and low carbon energy will be central to Labour’s plans in government. […] Without a low carbon infrastructure plan and economic strategy, in the modern economy you simply don’t have an economic plan’.

Ed is absolutely right. However, Labour should be in no doubt about the political will necessary to make this happen – tackling powerful vested interests in the face of vocal opposition from the right-wing press is no mean feat. It will require a big-hitter with the drive to transform our economy in the role of Secretary of State for Energy and Climate Change.

That’s why in the event of a hung parliament Labour should offer the position to Caroline Lucas.

For the avoidance of any doubt I should say that I want to see a Labour majority government in 2015. I want to see Labour pushing through the serious changes which Ed Balls describes. However, a hung parliament remains a possibility, one which Labour are preparing for by building bridges with the Liberal Democrats.

If the logical outcome of the next election is that Labour, as the largest party, seek to form a coalition with whatever remains of the Lib Dems, then it seems to me that Labour should also reach out to the Greens to form a three-party progressive coalition. Although adding one seat to the pot will not make much difference to the size of the government’s majority, having a Green MP as the Energy and Climate Change secretary would alter the DNA of such a coalition and ensure that Labour’s plan for a green overhaul of our economy does not get watered-down in the compromises involved in coming to an agreement with the Lib Dems. It is too important for that.

The scale and depth of the ecological crisis is such that the next government has to start taking serious action to tackle it. Labour is the only party who are serious about meeting this challenge and who have the ability to win an outright majority. But if, in 2015, we find ourselves in a situation where Labour is unable to govern alone, then a progressive Labour-led coalition with the Lib Dems and the Greens is the best alternative.

As Ed Balls rightly said in his speech to the Green Alliance, ‘[w]hat Britain really needs is leadership, policy certainty and a cross-party consensus’. Should Labour find itself leading such a coalition then bringing Caroline Lucas on board would show that leadership and certainty. She could make a valuable ally for Labour in governing for a greener Britain.

9 Responses to “Opinion: In praise of Caroline Lucas”