The legacy of the financial crisis lives on, with banks still taking action to repair their balance sheets. 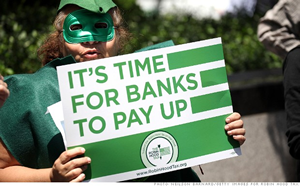 Stephen Beer is senior fund manager at the Central Finance Board of the Methodist Church. He writes in a personal capacity

The legacy of the financial crisis lives on, with banks still taking action to repair their balance sheets.

As a result more direct intervention in the financial sector has been planned in the European Union in the form of a financial transactions tax (FTT).

This looks certain to happen, but unlikely to be implemented in the UK. It should be. Labour is right to embrace it but should be bolder about implementing it, because the tax could chime well with Labour’s One Nation theme.

The banking sector is incorrigible. It cannot alone reform itself or repair its relationship with the rest of society. For example, just before his retirement, Bank of England governor Mervyn King reported that banks were lobbying government ministers against action by regulators. It is almost as if the financial crisis never happened; banks are still lobbying for lighter touch regulation.

There has been little remorse from the sector during a time when living standards have been falling and the country has been stuck in an economic depression for more than half a decade.

Moreover, as I have been arguing in the Christian Socialist Movement, if we are going to talk about remorse, we should also look for repentance. Repentance is more than saying sorry. It is about turning away from the old way of doing things and going in a new direction.

That is why reform is so important.  Looking at the issue this way, we can see how an FTT might be part of the answer.

Two broad arguments are made for a financial transactions tax:

In Europe there is much enthusiasm for the tax. Most EU countries voted in favour of eleven members implementing the tax on shares, bonds, and derivatives; a move supported by the European Parliament.

It may happen before the end of next year, would charge 0.1 per cent on share and bond trades and 0.01 per cent on derivative trades between financial firms, and could raise €34bn on one estimate. Some EU countries are already implementing a form of FTT.

There is, however, much resistance to a new FTT in the UK (in addition to the 0.5 per cent stamp duty on share purchases) from City and government. Partly, this represents resistance to a new tax and partly it represents the continuing power of City lobbying against reform. There are two substantial arguments.

The first good argument against the tax states that without an equivalent move in New York and elsewhere, a UK FTT would divert trading from London, so damaging our financial sector.

However, over thirty countries around the world have such a tax. There is even one in the US, with the SEC charging an extremely small tax on trades. In evidence to the BIS Select Committee recently, former Treasury minister Lord Myners suggested a solution to a wider ‘global problem’:

“We should not allow any bank in a developed country to establish a branch or a subsidiary in an offshore centre that does not comply with the OECD’s white list of financially compliant economies.  You could do something similar in terms of transactions.”

In any event, City business is likely to be affected by the European FTT and if it stands alone will not receive the revenues; the worst of all worlds.

Behind the lobbying there are signs of a general acceptance in the global financial sector that it will face more FTTs; the issue is what form they might take and if they will have unintended consequences.

A small FTT would be only a slight addition to the various costs traders face. Indeed, again in evidence to the BIS Committee, the CEO of RailPen made the following case for the FTT:

“It could potentially take a lot of unnecessary trading out of the system.  Who pays for the profits of traders?  Ultimately it seems to me it is the end investors…Even if we end up paying a small tax on the trades that we do, if it stops us paying for a lot of profits on other peoples’ activities, then we are still better off, net-net.”

The second strong argument against the tax is that it would represent a ‘thin end of the wedge’. The tax rate might be small now, but over time governments would look to increase it in search of more revenue. That would damage the City’s profitability and competitive position.

There is something in this and it comes down to how much we can trust future governments. Therefore the tax should be set at a low rate to dampen but not damage trading and the proceeds hypothecated.

Rather than go into the general government pot, advocates of the tax need to agree how the money would be spent. We should use it to encourage the rebalancing of the economy to which everyone pays lip service. The tax should help increase the productive potential of our economy via a major boost in education spending, or through funding a national investment bank, as the IPPR suggests.

The narrative for Labour therefore should be about finance operating differently, with a small tax to help it do so while increasing the potential of the whole country, of One Nation.

Stephen’s pamphlet, The Credibility Deficit – how to rebuild Labour’s economic reputation, is available for download now.