Reports of chemical attacks in Syria has returned international attention to the ongoing crisis, but there is disagreement over the right international response. 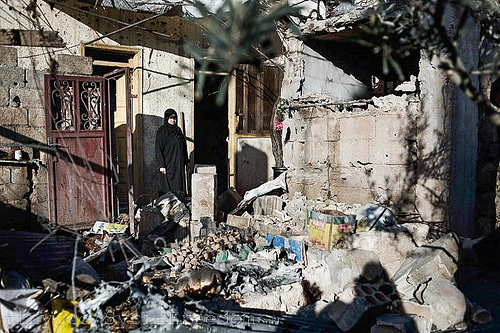 In recent months, Britain has been going through a phase of Syria fatigue. Astonishing figures of two million Syrians inside the country in desperate need, or the fact that over 1.7 million have fled to neighbouring countries, have failed to bring about the necessary international attention to the crisis.

For many, news items on Syria, showing impoverished, internally displaced people, or the mass exodus of thousands of Syrians into Iraq, Jordan, Lebanon, or Turkey, became the moment to switch off, so far removed from the public mindset.

It is tragic that reports of chemical attacks in Damascus’ eastern Ghouta district on 21 August had to provide that renewed focus on Syria’s conflicts in such a grotesque manner; disturbing images of convulsing children, people foaming at the mouth, alleged death by chemical warfare, images which bear testimony to the plight of an average Syrian – all of them victims to political positioning and diplomatic stalemate.

Other reports of chemical weapons attacks have immediately been treated with some scepticism, and whilst this is maintained for the attacks on Ghouta, some argue that the evidence of chemical weapons being used is far more compelling. Weapons expert Dr Jean Pascal Zanders has said that “footage from the current alleged attack(s) in the Ghouta district seems to offer more convincing evidence of poisoning through asphyxiation (witness the pinkish-bluish hue on the faces of some of the fatalities.” Zanders continues:

“Further elements that seem to confirm exposure to toxicants are the unfocussed and rolling eyes, severe breathing difficulties, in one instance a very erect penis, and possible signs of urination or defecation on trousers. None of the victims appeared to have external wounds from blast, shrapnel or bullets.”

With death tolls from the attack ranging from 136 to those as high as 1,300, information confirming a chemical attack remains sketchy, and it is therefore vital that UN weapons inspectors, investigating three sites in Syria, including Khan al-Assal near Aleppo, are allowed access to Ghouta. The Assad regime has dismissed the “floundering and hysteria”, which surrounds accusations of a chemical attack, denying its involvement and blaming it on the opposition – so too has Russia and Iran. One Syrian government figure has said it would be “political suicide” to carry out such a devastating operation with UN weapons inspectors only a few miles down the road.

There is also the added twisted irony with the attack coinciding with the first anniversary of Barack Obama saying the serious use of chemical weapons would cross a “red line”. Although we are fully aware that the Assad regime’s commitment to human life is non-existent, would it carry out such “political suicide” in full view of the international community? Is the Assad regime baiting the West, taunting our administrations over “red lines”, in full knowledge nothing will be done, with public support for any kind of intervention in Syria minimal?

If this were the case, Ghouta would be the most serious chemical attack since Saddam Hussein’s gassing of the Kurdish town of Halabja in Iraq in March 1988. UK Foregin Secretary William Hague has described it as “an attack that is probably without precedent since what we saw with Saddam Hussein in Iraq.” Many will be worried by the mission creep associated with comparisons made with Iraq and Saddam Hussein. Tony Blair rather crudely once said that Assad was only “a 20th as bad as Saddam.” If we were to use this despicable dictatorial scale, would a chemical attack in Ghouta ensure a higher position for Assad, and does this mean, in Blair’s terms, that the more Assad morphs into Saddam Hussein, the greater the case for intervention?

Perhaps Assad is acutely aware, that if ‘his’ attack was on the same scale of that carried out by Saddam Hussein on Halabja in 1988, nothing would be done, despite talks of “reaction by force”.

If the Assad regime did carry out these deadly attacks on Ghouta with no literal blood on its hands, we can be rest assured that government attacks on rebel held areas in Syria, including Ghouta today, will continue. No hangover from Iraq should determine the international response to this attack, either through rashness from sketchy details, or comparisons with Halabja, but a consolidated effort to ensure UN weapons inspectors are able to visit the site is absolutely vital.