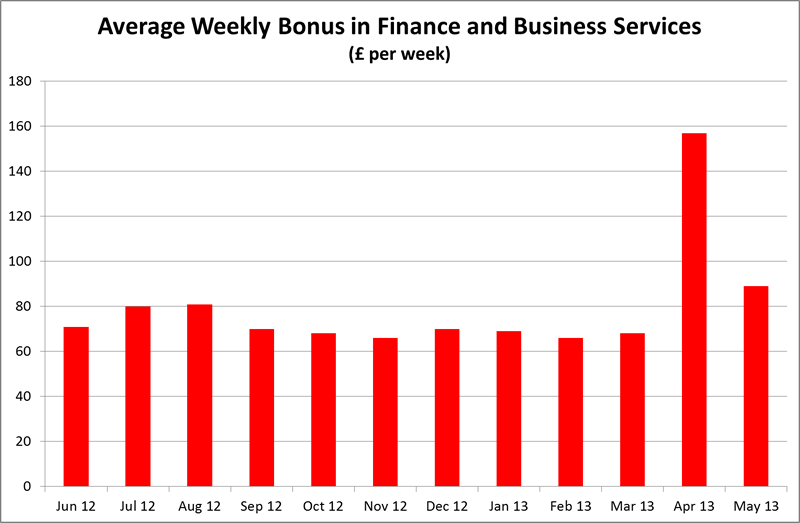 The most interesting point is what’s happened to pay.

Last month we pointed out that bonuses had had a large impact on the rate at which total pay was rising and that this was almost certainly down to a small number of very highly paid individuals in the City postponing their bonuses. We pointed out that the average bonus in the finance and business sector jumped from £69 a week in March to £143 in April. This was the month when the top rate of tax was cut to 45p.

This month confirms this analysis, with bonuses already starting to fall back:

The other trends are in line with what has been happening in recent months. Between Feb-Apr and Mar-May, employment rose 16,000 and unemployment fell 57,000. But a closer look at the figures confirms our observation last month that the strong improvements we saw in 2011 and 2012 have levelled off. 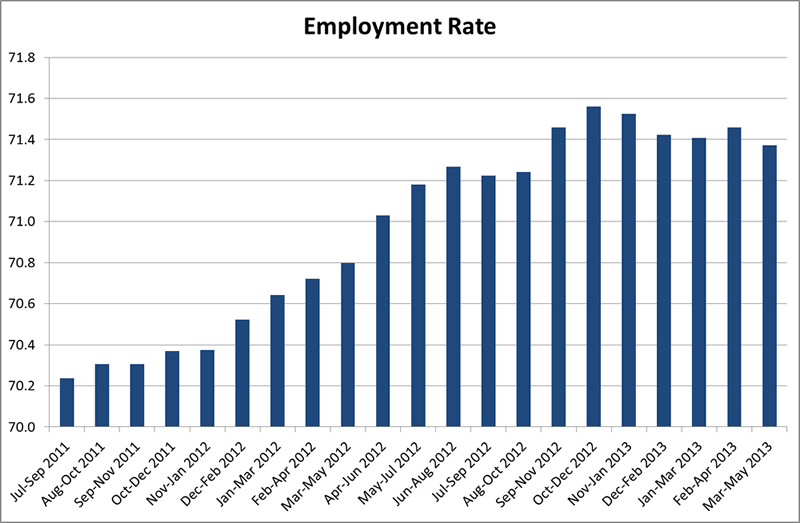 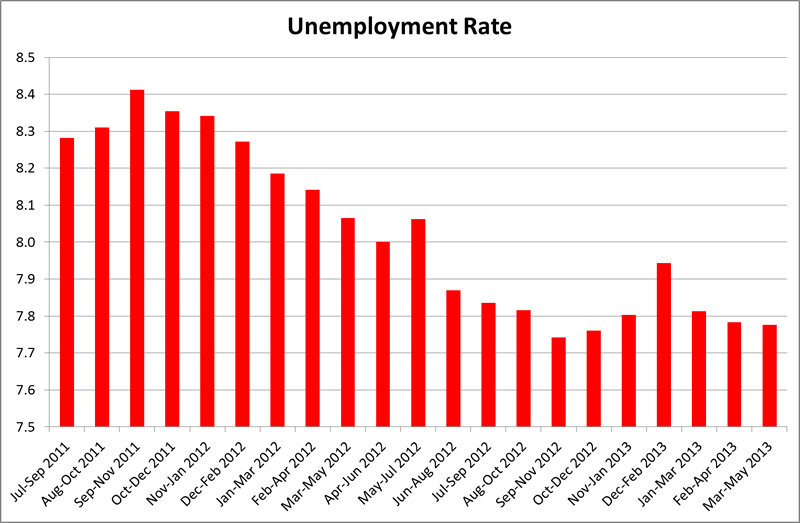 Youth unemployment is down 20,000 on the quarter but the level does not move a great deal. It has been within 50,000 of the one million level – one way or another – since Apr-Jun 2011 which is about 300,000 above pre-recession levels. Long-term unemployment is a more depressing picture, with the numbers unemployed over 12 months reaching yet another record. This figure currently stands at 915,000 – at the rate it is rising it will pass the one million mark by the end of the year.

Most commentators now accept that these positive results are linked to what is happening to earnings for the great majority of workers who don’t receive massive bonuses.

In the year to May, regular pay (that is, not including bonuses, which for the average worker only account for 7 per cent of total pay) grew just 1 per cent. The increase in the Retail Price Index for the same period was 3.1 per cent, which means that average real earnings fell by about 2 per cent (1.7 per cent if you use the Consumer Price Index, favoured by the government.)

We need to be clear what this means. If you’re a public sector worker, things are likely to be a good deal worse than the average. In some public sector jobs, if you’re low paid, you may have seen a small increase, but otherwise your pay will have been frozen. If that is the case, your real earnings will be down 3 per cent on the year.

But in most of the private sector, for people who are in the same jobs as they were a year ago, their earnings increase is likely to have been closer to the rate inflation. In the 12 months to the end of May, the median pay settlement in manufacturing was 2.6 per cent, in private sector services it was 2.25 per cent.

This is still short of inflation, but not as bad as the average earnings figure and the Recruitment and Employment Confederation reports that salaries for permanent staff they help recruit are growing at the fastest rate for nearly two years and for temporary staff for over five years.

The public sector alone isn’t large enough to account for this difference (80 per cent of workers work in the private sector). The rest is probably down to ‘compositional’ changes. There is always a good deal of ‘churn’ in the labour market – jobs being destroyed and created – and when the new jobs tend to be lower-paid than the jobs being lost, the average slips back.

This confirms what unions say they hear from members who have found jobs after being unemployed: that they simply couldn’t get work at anything like the pay levels they had before.

That’s why the employment figures are really a mixed bag. Of course, given the stagnation in GDP, it’s good that employment is holding up. In the short-term, worse pay is better than unemployment (and during the recession unions negotiated pay restraint and reduced working hours in return for employment guarantees from employers).

But in the longer term, it’s not good for us to have a permanent shift to lower pay. It would mean lower standards of living and constrained demand, making it even more likely that the recovery will be fuelled by debt, setting us off down the same road as before.

13 Responses to “Yes, the mega-rich did postpone their bonuses to avoid 50p tax”