Extremism may never be too far from the gaze of the topical political commentator, but events in Woolwich and subsequent EDL activity have ensured a stark rise in the column inches expended in service to the issue. 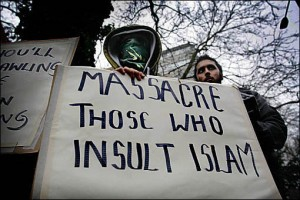 Dominic Ashton is a political researcher and writer, with a particular interest in issues of extremism

Extremism may never be too far from the gaze of the topical political commentator, but events in Woolwich and subsequent EDL activity have ensured a stark rise in the column inches expended in service to the issue.

A Charles Moore article in the Daily Telegraph was one effort at addressing the problem, though he provided a highly questionable diagnosis, trivialising the effects of anti-Muslim prejudice and the bigotry of the EDL in order to buttress his contention that Britain is unable to face up to the Islamic extremism in its midst.

In such circumstances, opposing columnists have something of an open net at which to hurl their counter-attack.

Yet the most high profile response from the Left, authored by Owen Jones, counters Moore’s derisory effort by putting forth a near mirror image article that commits much the same offense. Only here the double-standard is applied to the detriment of the far-right rather than Islamist extremists, who are swept reassuringly under the carpet.

There is, of course, nothing inherently wrong with devoting one column to the challenges posed by either far-right or Islamic extremism and Jones is, on the majority of matters, a highly credible and effective representative of progressive opinion.

Indeed, had he not gone beyond his assertions concerning the EDL and sought to justify a focus on one extremism at the expense of another, there would be little that warranted comment beyond uncontroversial agreement.

Whilst ostensibly a common-sense dissection of the EDL’s bigotry, the ensuing article treats extremism, much as Moore did, as a zero-sum game; a game in which, for Jones, the Left has no choice but to focus on the racism of right-wing extremists in place of condemning all extremists with equal vigour.

Moore’s views may have been begging for repudiation, but the unfortunate result is a riposte hamstrung by political commitments.

Elements of the Left continue to struggle with double-standards on this issue, evinced by Jones as he explains that it is logical to prioritise right-wing extremism since “violent political Islamism” is a fringe perspective.

This is undoubtedly true, yet the statistics referenced compare support for explicitly violent religious terrorism with a much broader metric of anti-Muslim prejudice.

Jones, unwittingly, highlights a recurring problem: too many on the Left are only comfortable combating unpalatable attitudes when they indicate sympathy for the far-right.

Unfortunately, there is no doubt that there is some support for extreme interpretations of Islam, including vituperative penalties for apostasy (a 2007 Populus survey for Policy Exchange is often cited as evidence for this point).

Such hard-line interpretations are still held by a minority, but deliberate ignorance does little to stem their growth.

Much as right-wing extremism has a fringe militant dimension, a broader ideological dimension and feeds on a breeding ground of broader prejudices, so does Islamism.

That is not to say that the extent of each of these dimensions is always perfectly clear, that there is no ambiguity concerning definition, or that that there is an even distribution in the prevalence of the two respective extremisms.

However Jones is, in principle, not even close to approaching Islamic extremists as he does the far-right and may undermine those doing so by misrepresenting the problem as just one of security.

The Left must be willing to engage with strains of Islamist ideology just as comfortably as it does ideologies of the far-right and recognise that though only a minority of extremists are terrorists, they are still harmful. The promulgation of anti-democratic, misogynistic and homophobic views by even non-violent Islamists, affecting other members of the Muslim community above all else, cannot remain unopposed.

Thus far, the Left is generally only able to point to grievances as intensifiers of Islamic extremism- which only presents itself in rare terrorist attacks. A similar approach to right-wing extremism would blame only policies of mass immigration and state multiculturalism, neglecting all mention of radical ideologies, and concentrate solely on acts of right-wing terrorism.

There is something uncomfortable at having to make these observations. Being forced to argue which extremism is the greater threat is academic at best, and a cruelly insensitive game played out by detached rival columnists at worst.

Only the most bias-afflicted commentators should have trouble denouncing both forms of extremism rather than seeking to trivialise the battle against one while condemning the other.

Most concerning about the two articles referenced is the tendency to partition the problem of extremism based on political orientation: the Right battling Islamism, whilst the Left attacks the far-right.  Extremism as a concept is particularly unamenable to such a division.

The distinctions of ‘Left’ and ‘Right’, seemingly much treasured by some columnists, fade into insignificance when confronted with actors that oppose the most basic tenets of democracy.

Against this backdrop, being only half-right should be an unsatisfying compromise.

6 Responses to “The Left must resist partisanship on extremism”