The Conservative party has long expressed strong support for an increase in the use of stop and search powers by the police, irrespective of the impact on community cohesion, and inequalities. 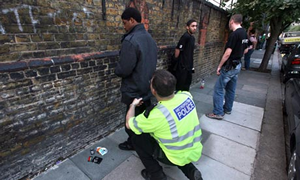 The Conservative party has long expressed strong support for an increase in the use of stop and search powers by the police, irrespective of the impact on community cohesion, and inequalities.

Now, Theresa May has backtracked and announced a six week consultation into the use of stop and search powers by police, after years of evidence that its application has disproportionately singled out ethnic minorities.

Police are able to use stop and search powers under the Police and Criminal Evidence Act (PACE) 1984. This Act is well known in marginalised black communities, and informing young people of their legal rights, as well as what to do if stopped, has long formed an essential part of the education of young people. There is even an app for it.

The Equality and Human Rights Commission (EHRC) commenced legal action against two police forces in 2010 due to this discriminatory practice. The action was suspended after a formal agreement and plan was made with the EHRC and the two forces to deal with the issue.

Three more forces, including the Metropolitan Police Service, voluntarily agreed a programme of reform to reduce race disproportionality in the application of stop and search to avert legal action by the EHRC. The outcomes of this work, Stop and Think Again, has been documented, demonstrating positive, fair outcomes are achievable.

This data clearly shows that black people were 4.6 times as likely to be stopped and searched by the Metropolitan Police as white people in 2009/10.  Following the work of the EHRC, this has fallen to 3.7 black to white ratio in 201213.

There has been no corresponding fall in the white: Asian ratio and the EHRC have identified this as an area for further intervention.

When announcing the upcoming review, May told Parliament:

“We’ve all been told stories by constituents and members of the public about what it’s like to be a young, law-abiding black man who has been stopped and searched by the police on more than one occasion.”

The question is why have these ‘stories’ been permitted to blight the lives and dignity of young black males for so long; to damage community cohesion, and to fuel distrust in the police along race lines.

The EHRC is to be commended on this work, and the question that must be posed is whether Theresa May’s hand was forced by the conclusion of the EHRC’s report, in which they have pledged to: