The Independent Parliamentary Standards Authority (IPSA) is likely to recommend on Friday that MPs receive an inflation-busting pay increase of £10,000. 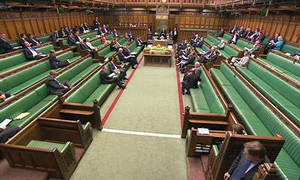 The Independent Parliamentary Standards Authority (IPSA) is likely to recommend on Friday that MPs receive an inflation-busting pay increase of £10,000.

The independent body, which ironically was set up so that MPs were not voting to increase their own pay, is expected to propose that MPs’ salaries rise from their current level of £65,738 to around £75,000. IPSA head Ian Kennedy is thought to prefer an even greater rise to £85,000.

Understandably many people are going to be incensed by this.

Here are five reasons why awarding MPs a pay rise is wrong.

1) People often argue that paying MPs more attracts the best people to serve the country, and to an extent this is probably true. It would be counterproductive, after all, to make a job in parliament prohibitive to those without vast reserves of cash.

But surely paying MPs too much could also mean more people looking to enter parliament for reasons of self-interest.

When people argue that “the best people will go elsewhere because the money is better”, I want to reply that they can’t, then, really be the best people, for if they care so much about making pots of money (as opposed to serving the country) they probably aren’t the sorts of representatives we want.

2) MPs are already paid nearly three times the average UK full time salary. There are no fixed hours, you get a long summer break and you can retire at a time of your own choosing. You are also in most instances – unless you do something particularly egregious – guaranteed tenure for four to five years, something increasingly rare in our ‘flexible’ economy.

As someone who has worked in a number of poorly paid, insecure jobs in the past, I’m not sure I wish to play the world’s smallest violin on behalf of our MPs.

3) Most people are seeing their living standards squeezed and public sector workers have just seen annual pay rises limited to 1 per cent. The boring cliche has it that we’re “all in it together”. If MPs get a bumper pay rise, we obviously aren’t.

4) As an MP you are perfectly entitled to work as many hours as you like in a second job. Moonlighting, in other words. There are already questions over whether this should be allowed to continue (I believe it should not, for the reasons Mark Ferguson sets out in this excellent post at Labour List), but while it is going on (according to recent analysis, Conservative MPs declared more than £4.3m in earnings from outside directorships or jobs, versus £2.4m for Labour) MPs do not need a pay rise.

As for the argument that MPs only have second jobs because they aren’t paid enough, see point two.

5) A very large salary ensures that the travails of everyday life which most people have to contend with are all the more incomprehensible to our MPs.

When socialists used to promise that if elected they would only draw the wage of an average worker, they weren’t merely striking a pose. The more money you have the more you can insulate yourself from social problems like crime, inequality and exploitation. The class system still exists, and people tend to want to look after people most like themselves.

Why suppose this would be any different for our MPs?

23 Responses to “Five arguments against paying MPs lots of money”