Mostly male, shaven-headed and white, they can be found in almost any of Britain’s urban centres - a jostling crowd beneath a thicket of placards and Crosses of St. George. 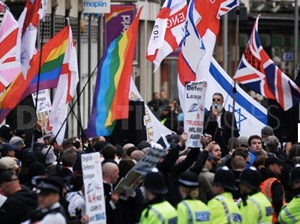 Mostly male, shaven-headed and white, they can be found in almost any of Britain’s urban centres – a jostling crowd beneath a thicket of placards and Crosses of St. George.

Whether a dozen people standing in the drizzle in a provincial town, or a baying crowd of thousands flooding through a city centre, the chants and the message are the same: they are the English Defence League and they want Muslims out of the UK.

Occasionally, though, unexpected flags can be seen amongst the ranks of red crosses. Some have a rainbow imposed in the corner, some are Union Jacks with the blue replaced with pink, and it is even possible to spot an occasional Gay Pride flag, emblazoned with the legend, ‘DEFEND FREEDOM: UNITE AGAINST ISLAMIC MENACE’.

The far-right in the UK is made up solely of uneducated, white, heterosexual, working-class men. Or so many people seem to think. The Lesbian, Gay, Bisexual, Transsexual and Queer movement preaches tolerance and inclusion, while the English Defence League is a reactionary, Islamophobic organisation which relies on flag-burning, death threats and violence to communicate its message.

At best the existence of an LGBT division of the EDL seems a bizarre publicity stunt, at worst an underhand attempt to provide legitimacy to a fundamentally racist, homophobic and intolerant organisation.

However behind the intimidating frontline of brute aggression there exists a suit-wearing wing of the EDL which engages in a pseudo-intellectual campaign of indoctrination.

It is easy to see how having a publicly visible LGBT section benefits the EDL as they seek to cover themselves from accusations of homophobia, regardless of whether or not the organisation genuinely wants to protect the LGBT population of the UK.

On the old EDL forum, a post by a gay supporter of the League described how he was turned on and viciously beaten by his supposed comrades, leaving him with “blood pouring out of 2 bad cuts” and a smashed-up car. This is the background of explicit, violent hatred against which the LGBT division operates, and against which they justify their support for the League.

The leader of the EDL LGBT division is a man who goes by the name of Tommy English, a pseudonym possibly taken from the name of a Loyalist paramilitary who committed violent acts against Catholics and Republicans before being murdered himself in 2000.

When I spoke to English, I heard repeated many of the same lines I had already read on the anonymous official statements he presumably helped to create. However, when not repeating this rhetoric, he provided an insight into what could possibly motivate an openly gay man and his boyfriend to devote themselves to an organisation that has proven itself to be homophobic time and again.

Tommy English describes himself as the leader and most active member of a division “about 30 strong”, largely based in London. When I asked him what he was personally fighting against, he stated that “the spread of [Islam] will increase homophobia and homophobic attacks” in the UK.

Official EDL press statements likewise make the claim that “gay people in Britain have far more to fear from Islam than they do from the EDL”. The stance of English and his comrades is that Sharia law is undermining Western democracy and legal systems, and thus threatening the rights of gay people to exercise their sexuality as they please. All other threats to the gay rights movement are seemingly irrelevant before a perceived Islamic menace.

When asked about any antagonism between his division and other sections of the EDL, like that which clashed with the Bristol Pride LGBT event in July 2012, he made his own views extremely clear. To English, “there are NO tensions between straight members and LGBT members. At the end of the day we all have the same goal, sexuality doesn’t come into it”.

Looking at news coverage of EDL protests, it is not difficult to hear homophobic insults being thrown around – attacks that are even more in evidence when browsing their forums, message boards and web pages. Avowed homosexual-hater Terry Jones, the Qur’an burning pastor, has been invited to speak in the UK by the organisation Tommy English represents.

Closer to home, drunken EDL members have allegedly violently assaulted gay men on multiple occasions, such as during the Bristol Pride demonstration, despite their claims to solidarity with the LGBT movement.

“I’ll tell you something”, he says. “When the media record our marches, when our rainbow flags are approaching, they cut it out and when pictures make the paper they cut out our rainbow flags.” He then went on to tell me about filming an interview with his boyfriend at an EDL march that was never made public, and to state that the “far-left” media are responsible for portraying the EDL as homophobic.

English told me that to him, the only real “Nazis” are the media who he believes misrepresent his cause.

It is easy to write the EDL off as mindless thugs, but to do so is to underestimate them. The intellectual wing of the organisation know they can legitimise their cause by recruiting from minority groups like the LGBT movement, while playing on the desires of young men to fight even when there seems to be no real enemy.

The LGBT division may in part exist as a political device to cover the EDL from accusations of homophobia, but the fact cannot be ignored that there are gay members of the League who are genuinely and actively committed to its cause.

The double standards at play here are obvious to many, but Tommy English and his comrades are disturbingly convinced of the righteousness of their cause and the evils of Islam. This is no mere publicity stunt; Tommy English is real, the EDL LGBT division is real, and their hatred is real too.

151 Responses to “The English Defence League LGBT division: the dark side of the rainbow”