Labour was in government during the period in which the Mid–Staffordshire NHS Foundation Trust presided over the abuse and neglect of thousands of patients, leading to many deaths. 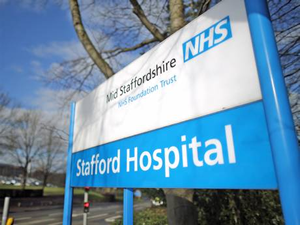 Labour was in government during the period in which the Mid–Staffordshire NHS Foundation Trust presided over the abuse and neglect of thousands of patients, leading to many deaths.

Now, a police investigation has been launched to review between 200 – 300 deaths at the Trust, where there are clear indications of abuse and neglect.

The scope for bringing criminal charges will also form part of the police review.

The publication of the report of the Francis Inquiry earlier this year found failings by the bodies charged with oversight and monitoring responsibilities and inadequate responses to the many complaints of patients and their families.

Jeremy Hunt made it clear in his comments earlier this year that he would like to see nurses, doctors and managers face criminal prosecution, noticeably leaving out MPs, Monitor, the NHS regulator, also cited by Robert Francis QC as having failed to protect patients.

It’s not hard to imagine that nursing staff, among the most disenfranchised NHS workers, are very likely to find themselves in the frontline for investigation. Working for years under extremely poor conditions, nurses at the Trust felt their voices were ignored.

Cruelty, neglect and abuse cannot be excused but can be explained. It can certainly be prevented by a well-resourced and supported teams of care professionals.

Tory MP Charlotte Leslie has not wasted any time in seeking to opportunistically score political points by calling for the tentacles of the police investigation to reach into the former Department of Health (DH), and look at the actions of the former Labour government.

It is to be assumed that Ms Leslie will similarly call for police investigation of Tory and Lib Dem politicians as part of the current NHS investigation into an excess 3000 deaths in 14 NHS trusts since 2010.

The Tories will undoubtedly seek to gain political capital out of this investigation. Overworked frontline workers and junior/middle managers may disproportionately face criminal sanctions.

However most important are the victims who were at the bottom of this pitiful pile. Mostly elderly, disempowered and vulnerable, this is an opportunity for justice for those harmed and those still suffering.

This move must be supported, but the police investigation must be independent, transparent, balanced, and above all not be stained by Jeremy Hunt’s determination to gain a few votes for his Party.

6 Responses to “Mid-Staffordshire: Why the police investigation must not target powerless NHS workers”