James Bloodworth looks back at the week’s politics, including our progressive, regressive and evidence of the week. 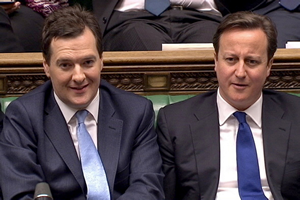 • In his Comprehensive Spending Review on Wednesday, the chancellor George Osborne announced £11.5 billion pounds worth of cuts – a result of the UK economic recovery being the slowest for 100 years.

In detailing where the axe will fall in 2015/16, the chancellor announced a 1 per cent cap on public sector pay rises, various departmental cuts (excluding the NHS, schools and foreign aid), as well as a welfare cap (excluding the state pension).

The chancellor also announced that jobseekers will face new requirements to get benefits. Non-English speaking claimants will be required to learn English or risk cuts to payments.

At Left Foot Forward this week we looked at why George Osborne is still having to make cuts (clue: the economy isn’t growing), as well as at the new changes to the requirements for jobseekers. Sarah Bickerstaffe of IPPR argued that the health ringfence is not enough to protect the NHS, and Carl Packman looked at the potential bonanza for payday lenders on the back of the benefit changes.

• The Treasury announced today that the British Geological Survey (BGS) has found 1300trn cubic feet worth of shale gas trapped in the rocks beneath Lancashire.

There is now believed to be as much as 1,300 trillion cubic feet at the Bowland site in Lancashire – much more than previously thought.

Greenpeace argued that using a geological survey to pre-announce a shale gas driven boom could risk “putting politics before scientific or economic reality”.

• In a spiteful article for the Daily Mail this week, columnist Liz Jones wrote that the pop star Rihanna was a “toxic role model” for young fans because she gloried in “drugs, guns and sleaze”.

The killer line came further down the piece, however, where Jones said that Rihanna’s fashion sense “surely invites rape at worst, disrespect at least”.

If this sounds familiar, that’s because it’s rape apologism – the stuff that usually comes out of the mouths of…rapists.

Slamming the “downgraded” chancellor, the position of the devolved governments is starkly at odds with that of chancellor George Osborne.

Welsh finance minister Jane Hutt said the “evidence was clear” that “well chosen public infrastructure investments can have both short term and, more importantly, sustained, long-term benefits for the economy”.

Pamela Geller and Robert Spencer – two US far-right activists – have been banned from the UK by home secretary Theresa May after a concerted campaign to stop the two addressing an English Defence League rally on Saturday.

The letter from the home secretary says: “After careful consideration, she [the Home Secretary] personally directed that you should be excluded from the United Kingdom on the grounds that your presence here is not conducive to the public good”.

While the two may be odious, there were concerns at Left Foot Forward that a ban might be counterproductive, and turn Geller and Spencer into free speech “martyrs”.

Official emissions figures released this week by Transport for London (TfL) showed that the worst polluted areas in London are overwhelmingly the the poorest parts of the city.

The Mayor’s own research has shown that poor air quality is London’s silent killer, causing over 4,000 premature deaths each year. In some London boroughs, as many as eight per cent of deaths are due to poor air quality.

In the face of this crisis, however, Boris has consistently dithered and made it a problem his eventual successor will have to tackle.