The anti-fascist campaign group Hope Not Hate (HNH) has started a petition to prevent two American bloggers from being given permission to enter the UK. 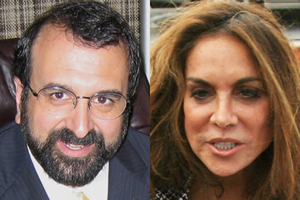 The anti-fascist campaign group Hope Not Hate (HNH) has written to the home secretary Theresa May urging her to stop Pamela Geller and Robert Spencer from entering the UK to speak at an English Defence League rally on Saturday 29 June.

Largely unknown in Britain, Geller and Spencer have carved out a reputation in the US as vehement anti-Muslim campaigners. They head up an organisation called Stop the Islamization of America, best known for its opposition to a proposed mosque near Ground Zero.

They are not, however, in the sense of Richard Dawkins or the late Christopher Hitchens, anti-religion – they are anti-Muslim. To cite just one example of their prejudice, Spencer does not believe a distinction should be drawn between violent jihadists and the majority of peaceful Muslims:

“There is no distinction in the American Muslim community between peaceful Muslims and jihadists. While Americans prefer to imagine that the vast majority of American Muslims are civic-minded patriots who accept wholeheartedly the parameters of American pluralism, this proposition has actually never been proven.”

As for Geller, she has claimed that Barack Obama secretly revealed to the Egyptian foreign minister that he is a Muslim. In the same article, Geller remarked that:

“This is devastating news, and yet no media is covering it (emphasis original). A stealth jihad on the White House’, adding that ‘This is akin to an SS officer getting elected president during WW II” [sic].

Geller is also a prominent genocide denier. As One Law for All put it in their brilliant report on the far-right, Enemies not Allies:

“Geller has defended Radovan Karadzic, and likened his war crimes trial at The Hague to a ‘Sharia court’. She has also asserted that Bosnian Muslims killed themselves during the conflict in question in order to ‘manipulate media coverage’. Further, Geller has published and endorsed articles by Julia Gorin, which in their criticism of Karadzic’s trial refer to the ‘8000’ Muslims supposedly executed by Serbian forces’ [sic], and place scare quotes around the word ‘genocide’ when discussing Srebrenica.”

Banning them from entering Britain, however, would be counterproductive. These people already self-pityingly style themselves as a silent majority whose opinions are repressed by the state. Every time one of their number talks you can set your watch because it is a certainty that at some point they will claim they are “not allowed to talk about Islam/Muslims/immigrations etc”.

Do we really want to provide them with such easy ammunition to throw back at us?

No, Britain is a sufficiently mature nation to reject the extremism of people like Geller and Spencer. There has been no ‘wave’ of anti-Muslim bigotry on the back of the Woolwich killing of Drummer Rigby. Those incidents that have occurred appear mostly to have involved those, like the EDL, who were simply waiting for an excuse to legitimise their bigotry.

In the age of the internet preventing people like Geller and Spencer from speaking at a rally is also fairly inconsequential, anyway. Their videos can be found all over youtube if that’s your thing.

To put it in free speech terms, other people should also be free to hear what Spencer and Geller have to say just as those of us reading this article are – and free to reject their twisted reasoning, if you can call it that.

Banning them for what they might say is also dangerous territory. Free speech within the law should be paramount. If they break British law then they should be asked to leave.

The worst thing to do would be to allow them to portray themselves as free speech martyrs. As Nick Cohen recently phrased it, if you can’t defeat idiots like this with rational argument move out of the way and let people who can.