Acora IT Outsourcing Ltd has caused shock and dismay with the publication of an advertisement that is extremely offensive and insulting. 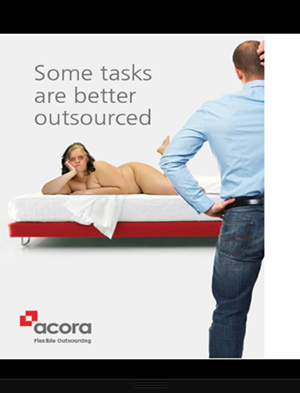 Acora IT Outsourcing Ltd has caused shock and dismay with the publication of an advertisement that is extremely offensive and insulting.

The company, which has an all male leadership team according to its website, has shown that it is completely out of touch with the fact that 1970s style sexism is no longer acceptable.

The image is a visual ‘joke’ reminiscent of the ‘comedy’ of people like Bernard Manning and Jim Davidson, and it is incredible that the company thought this would amuse its clients, or the public in 2013.

Describing their vision in the following way, this is a company that has proved it is out of touch with modern social responsibility:

“We believe that thought-leadership drives innovation. We are dedicated to constant progress, sharing knowledge, and creating a valuable resource for the businesses we work with”

The decision to run with this advertisement undermines any claim to a progressive vision, or to  innovation. It would be interesting to know what market research methodology was used to develop this piece of marketing, and whether it was tested its target audience, the largely male IT audience it is aimed at, or whether the general public was involved.

Following a huge backlash and much criticism, Acora Ltd tweeted a statement which amounts to nothing more than a reinforcement of the blindness that led to the publication of the advertisement in the first place.

In their ‘apology’ there is no recognition that the advertisement is unacceptable, instead suggesting that it is acceptable apart from some who failed to find it funny.

They have completely missed the point that there are damaging consequences of such images for everyone. Although it is a woman who is the object of ridicule, and the man is depicted in a dominant position, men often find these images demeaning of women.

Additionally men would reject being placed a role that they do not find appealing. Contemporary men do not view their relationships with women in the light suggested by this advertisement.

The impact of such images on the education children and young people, about power in gender relationships, is destructive as it promotes a passivity-dominance model of a bygone age, but one which underpins domestic violence and abusive, unhealthy relationships. 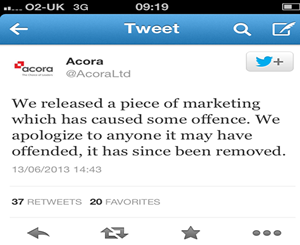 Acora Limited has also insulted its customer base, which surely would not want to be associated with the core message underpinning this advert: IT is a sexist, misogynistic world which does not care about social progression, as long as a few sexist people are amused by the disgusting demeaning of women – and a lot of business is done.