The New Bus for London is an expensive vanity project which the next Mayor will abandon as an outdated and polluting waste of money. 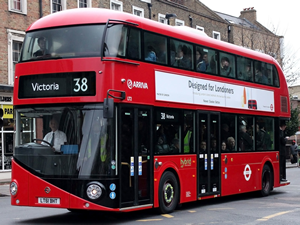 By Darren Johnson AM, Green Party member of the London Assembly

The New Bus for London is an expensive vanity project which the next Mayor will abandon as an outdated and polluting waste of money. Nor will you see it carrying paying passengers anywhere else in the world. No one wants it and when the full cost of the bus becomes apparent, Londoners won’t want it either.

The order for 600 of these new buses will add up to £80m onto the fares bill between now and 2016. That is a huge sum of extra cash to find during years of austerity driven cuts in the government’s grant to Transport for London.

The extra ‘health and safety’ staff members on each of these 600 new buses will cost around £37m extra a year. We can now add to that figure the £32m difference between the ‘average’ cost of 600 ordinary hybrid buses and the Mayor’s estimate of what his new buses will cost.

The TfL press release states that “The price difference is accounted for by the much higher specification of the new bus compared to a standard hybrid bus.” The emission results seem impressive and the Mayor makes bold claims about this being the greenest of buses.

However, there is growing evidence that the lab results for emissions are very different from the pollution found at the roadside. Real world results from the prototype buses show that they are consuming twice as much fuel as on the Mayoral press releases and that probably means that the emissions are twice what is claimed. The production line vehicles may be a bit better, but none of the hype about them being the greenest vehicles in Europe should be taken at face value.

The Mayor has boasted about the green credentials of these new buses, but they will all have to be retrofitted at the end of next year with additional anti-pollution devices in order to keep up with the higher standards for all new buses being produced throughout Europe. It will be outdated before the bulk of them are on the road and not the kind of vehicles you would expect to see chugging around the Mayor’s Ultra Low Emission Zone in 2020.

I accept that it is a very nice bus to look at, but the third entrance and second staircase makes it unsellable outside of London. Nor can people in other parts of the country afford the higher fares that stem from the luxury of employing a bus assistant whose only real job is to stop people falling off the rear platform when it is open.

Normally bus operators in London buy all the red buses and then recoup some of the capital outlay when they renew their fleet and sell their old buses to some provincial bus company. As the operators can’t sell them on, they don’t want to buy them, which is why the Mayor required TfL to buy the buses themselves, at a premium rate and take on all the upfront costs and risks.

The NBfL will remain in London for all its working life of 14 years. By the time of the next Mayoral elections there will be a new generation of hybrid buses outperforming these buses and costing a lot less. The next Mayor will be making the switch to electric buses, rather than hybrids.