The home secretary Theresa May announced today that under the Conservatives those convicted of killing a police officer will have their sentences raised to the 'whole life' category, usually reserved for the very worst types of murderer. 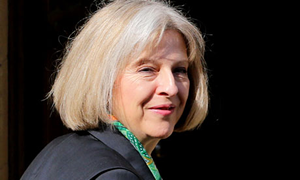 The home secretary Theresa May announced today that under the Conservatives those convicted of killing a police officer will have their sentences raised to the ‘whole life’ category, usually reserved for the very worst types of murderer.

It may be true, as May says, that “to attack and kill a police officer is to attack the fundamental basis of our society”; but what about the alarmingly high death rates for those in police care or in contact with the police?

What, if anything, is the government doing about this?

There have been seven direct killings of police officers since 2005. This is of course seven too many. Like the loss of any life – and perhaps especially the life of a public servant – it is a tragedy. But to put it into some kind of perspective, this compares with 376 people who have died either in police custody or following other contact with the police in the same period.

A recent case was that of Nigerian Masters student Boniface Umale, who died in police custody at a Durham prison in mysterious circumstances after he was detained for an unknown offence. It was reported that Barrister Adeniji of Rock Solicitors, the lawyer hired to pursue the case, turned up at Durham prison to see his client only to be told that his body was being prepared for cremation.

The most damning fact, however, is this: despite the fact that 1,433 people in England and Wales have died either in police custody or following other police contact since 1998, no police officer has ever been convicted of murder or manslaughter for a death following police contact.

As I have said, this is not an attempt to diminish the seriousness of crimes committed against police, nor is it to sneer at the danger associated with the line of duty. It is rather about asking a very simple question: in this context, is the latest policy announcement yet another pledge put out there to appease the hard right of Ukip?

One Response to “As well as talking tough on police killers, Theresa May should look at police brutality”