When Europe comes to the fore of politics in Britain, the polls shift in favour of staying, as they did after David Cameron’s speech. When it comes to the crunch, however, the voting public are too clever to turn away from our most valuable relationship. 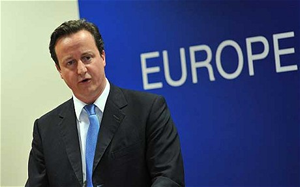 Phillip Souta is the director of Business for New Europe

Nigel Lawson’s conversion to the UKIP agenda on the pages of the Times must have made Nigel Farage’s day.

It is undeniable that the two Nigels’ message on Europe is getting more of a hearing now than it has in the last ten years. In the same way that UKIP’s rise has caused commentators and the mainstream parties to show their spending plans do not stand up to scrutiny, the better off out camp is facing the same challenge. “Welcome to test cricket,” as John Major said.

For the last 40 years, the British people have always voted for parties in favour of our EU membership. Whilst those who support membership must continue to explain why, there is arguably a much heavier burden of proof on those who would take us out. Where is the evidence it would be good for us, and what are the alternatives.

The impact on British business

The argument is often put forward that the UK is a net contributor to the EU (equivalent to roughly £750 per household each year) and therefore makes us worse-off financially. That contribution gives us access to £11 trillion worth of economic activity and free trade which has generated around £3,300 per British household per year over the last 30 years. If we were to leave, we would no longer have unfettered access to the largest market in the world, and one that is on our doorstep. For the foreseeable future, approximately half of Britain’s trade will be with Europe.

The UK is home to large numbers of foreign companies who choose to locate here to avail of the EU market access that our membership provides. If we left, so would many of those companies.

Departure would also jeopardise the 49 per cent of foreign direct investment stock in the UK that comes from other EU countries, which was worth £465bn in 2009. British goods would incur significant import taxes (55 per cent in the case of dairy produce) to reach the EU market, making them less competitive. Half our corporation tax revenue from financial services would be at risk, and the possibility of the EU erecting non-tariff barriers to the free movement of services would jeopardise London’s place as a global financial centre.

A future outside the EU is of course conceivable for the UK, but it is not clear what it would look like. Those advocating withdrawal often mistakenly contend that the Norwegian or Swiss models could be adopted by the UK. Norway has a population of around 4.5 million and a GDP of around £320 billion. It also has a sovereign wealth fund presently worth in the region of £400 billion, set to rise to over £650 billion by 2020. It has this through its vast reserves of oil and gas. This is the equivalent of the UK having a wealth fund 25 per cent greater than our GDP – which we do not.

Only this week it has been announced that the Norwegian government is dipping into this fund in order to prop up its economy – this option would never be available to the UK. Therefore, Britain needs the EU more than Norway does.

Switzerland, for its part, is a unique case, politically and economically. It has taken two decades for Switzerland to sign around 120 bilateral agreements. The UK economy cannot be made to suffer while politicians hash out individual deals. Similarly, the proposition that the UK will leave the EU and then sign a free trade agreement, with no effect on our economy, is misguided in the extreme.

It would be many years before the UK is at a point where it could come to such an arrangement. The EU-US free trade agreement, for example, had subject to discussion for over a decade before both parties even entered formal discussions.

Meanwhile, Britain’s trading partnership with other large economies such as China and India will not prevent economic degradation. Both offer great opportunities, and while our current trade with these countries is large, it is much less than that which exists between Germany and China. Our trading potential with these economies is therefore greatly bolstered by coordinating with other EU members, and our negotiating position in any free trade talks is strengthened.

Other EU countries faced with the same EU rules are much better at exporting to emerging markets than we are. Germany’s exports to such economies have roughly doubled over the last ten years. If they can do it, why can’t we? Blaming the UK’s poor export performance on the EU is an easy out; there is no reason to believe it would be cured by leaving the EU.

Many advocates of leaving seem to believe reams of employment, safety and product regulations would evaporate on departure, somehow freeing the UK to push ahead in the global race. This is dangerously misleading. Everything we export into Europe would have to comply with the same rules as they currently do, except we would have no say. No UK government would suddenly abolish health and safety rules and maternity leave.

When Europe comes to the fore of politics in Britain, the polls shift in favour of staying, as they did after David Cameron’s speech. People are frustrated by perceived bureaucratic excesses – which, by the way, exist at local, regional and global levels as well – and often register that as a protest vote. When it comes to the crunch, the voting public are too clever to turn away from our most valuable relationship.

14 Responses to “Blaming the EU is an easy way out. Leaving it would be bad for Britain”