On the back of chairman of the Commons Energy and Climate Change committee Tim Yeo's comments that climate change may not be man-made after all, the Telegraph have done a poll asking its readers if they think the same. 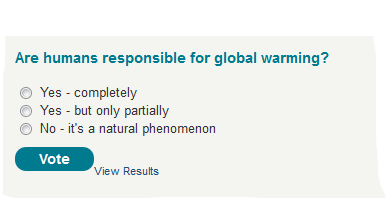 On the back of chairman of the Commons Energy and Climate Change committee Tim Yeo’s comments that climate change may not be man-made after all, the Telegraph have done a poll asking readers if they think the same.

After voting in the poll – I voted ‘yes completely’, as you might have guessed – you get the results. And guess what – a whopping 48 per cent of Telegraph readers believe that climate change is a ‘completely natural phenomenon’. 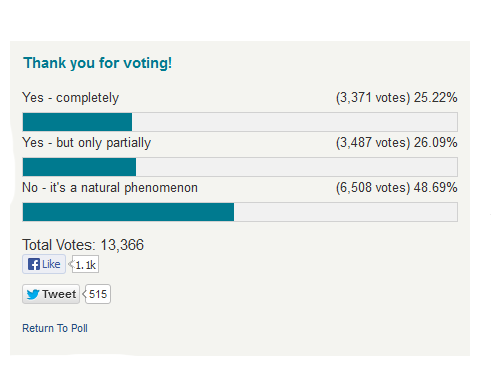 Rather than berate readers of the Telegraph for their views myself, I’ll leave the floor to Martin Wolf of the Financial Times (£):

An analysis of abstracts of 11,944 peer-reviewed scientific papers, published between 1991 and 2011 and written by 29,083 authors, concludes that 98.4 per cent of authors who took a position endorsed man-made (anthropogenic) global warming, 1.2 per cent rejected it and 0.4 per cent were uncertain.

Never underestimate the power of self-denial.

22 Responses to “Half of Telegraph readers belief climate change a ‘natural phenomenon’. 98% of scientists disagree”