The EU Commissioner for employment and social affairs, Laszlo Andor, is taking the British government to court over what it says are discriminatory practices in its application of regulations on welfare payments. 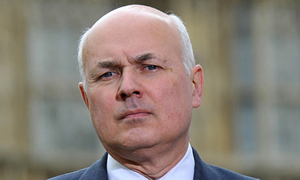 The EU Commissioner for employment and social affairs, Laszlo Andor, is taking the British government to court over what it says are discriminatory practices in its application of regulations on welfare payments.

EU foreign nationals living in the UK are eligible to claim welfare benefits if they pass the qualifying tests. One of these is the test of ‘habitual residence’ which should be applied in the EU.

Instead, however, the UK requires EU nationals to pass a more challenging ‘right to reside’ test, which many fail.

Iain Duncan Smith, work and pensions secretary (pictured) has stated that Britain will resist this attempted “land grab” by Europe, in a bid to end “benefit tourism” to the UK.

In the run up to the next general election, and following a hypothetical outright Conservative election win, this represents a crucial battle for Tories. They have committed to an ‘in/out’ referendum in 2017 if attempts to win back powers from Brussels cannot be negotiated.

Curiously Nick Clegg has supported Duncan Smith’s upcoming battle  in the European Court of Justice, seeing it as protecting the UK welfare benefits system from becoming a “free for all”.

EU nationals working in the UK have complained to the commissioner of having access to family welfare and unemployment benefits denied despite having the right to live and work in the UK. Duncan Smith can claim that Britain is not alone in finding the European welfare benefit rules unfair, as wealthier countries Holland, Austria and Germany have also challenged the rules.

Restrictions on the rights of EU national from Romania and Bulgaria will be lifted at the end of this year, fuelling fears that people from the more impoverished European nations could flock to the UK, or wealthier UK nations, to claim benefits.

One Response to “EU benefits are ‘land grab’ by Brussels, says Duncan Smith”