For Virgin this is the latest in a long line of questionable stances it has taken to its women employees (as well as women more generally), which leads one to wonder if Virgin has a problem - a sexism problem.

For those who missed it, last month Virgin America released a new in-flight option which lets passengers use their on-board entertainment console to order cocktails and snacks for other passengers.

The purpose of the new ‘feature’ was summed up by a quirky (or in my opinion weird) video entitled ‘Richard Branson’s Guide to Getting Lucky’.

The video is clearly tongue in cheek, but it isn’t a spoof – Virgin are promoting their seat-to-seat delivery service as a way to break the ice with a fellow passenger; break the ice in order, ultimately, to ‘get lucky’.

As well as appearing to perpetuat the notion that women require material gifts (drinks, presents etc) before they will consider ‘hooking up’ with a member of the opposite sex, Virgin’s new service also encourages the worst kind of lecherous male. As Caroline Morse of Smarter Travel noted:

“Imagine being stuck next to that same seatmate, except the seatmate is sending you free booze, hoping to loosen you up a bit. It’s like being trapped inside a flying meat-market bar!”

There is no mention in Virgin’s literature of women who are on the receiving end of opportunistic advances being able to order free parachutes.

Yesterday it was the turn of Virgin Trains to make the news. According to the Evening Standard, female staff are refusing to wear new uniform blouses because they are “see-through” and “leave very little to the imagination”. One staff member told the Standard that the uniforms were “cheap and nasty” and could be see-through in the sunshine.

Leader of the Transport Salaried Staffs’ Association trade union, Manuel Cortes, said female staff had come to him with complaints about the “flimsy” and “skimpy” blouses.

In response Virgin bosses have offered female staff £20 vouchers to buy extra underwear to cover up. (Is £20 really enough to buy anything clothes-wise these days?). 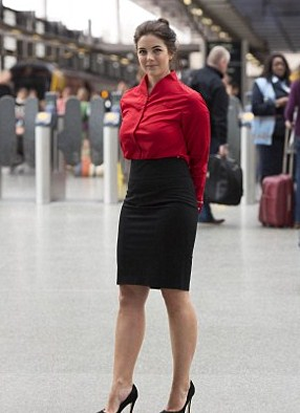 Virgin has a history of seemingly promoting its female staff members as passenger ‘perks’. In 2009 the Advertising Standards Authority received 29 complaints about a Virgin Atlantic ad which featured a number of men ogling an array of air hostesses.

And in a piece for Eureka Street examining how rival airlines in Australia treated their female employees, Catherine Marshall noted that:

“A ticket on a Virgin flight…brings with it the allure of sex, the commodity on which the company’s brand has been built. Youthful air hostesses wear fitted dresses, ‘Virgin Girl’ pin-ups decorate the noses of some aircraft, and the company’s advertisements depict flight attendants as sexually alluring supplicants and male passengers as the deserving receptors of their attention.”

Were the complaints by Virgin staff about its new uniforms an isolated incident, one might put it down to a simple misunderstanding – or a predictable desire by the company to cut costs. For Virgin, however, this is the latest in a long line of questionable stances it has taken towards women – and its female employees in particular. Leading one to wonder whether Virgin has a problem – a sexism problem.

3 Responses to “Does Virgin have a sexism problem?”