In the next few days, and for the first time in human history, the concentration of CO2 in the atmosphere will hit 400 parts per million (ppm), a level long seen as critical in measuring the damage done to the earth by man-made pollution. 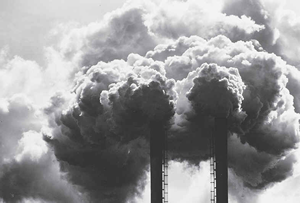 Liam Kirkaldy is a volunteer at Greenpeace

In the next few days, and for the first time in human history, the concentration of CO2 in the atmosphere will hit 400 parts per million (ppm), a level long seen as critical in measuring the damage done to the earth by man-made pollution.

Most scientists put the ‘safe level’ of CO2 concentration at around 350 ppm, though ideally it would be much lower. At time of writing, levels stand at 399.72 ppm. The rate is increasing constantly.

The 400 ppm milestone has, admittedly, been breached before. During the Pliocene epoch, 3-5 million years ago, carbon levels stood at 415 ppm, according to research by the Scripps Institution of Oceanography, UC, San Diego. At this time, temperatures were up to four degrees higher and humans did not yet exist – if we had, we would have been under somewhere between five and 40 metres of sea water.

The Pliocene era is our guide for things to come, only this time the CO2 concentration is increasing much faster. In fact it is increasing faster than at any time on record.

At the start of the industrial revolution, when humans began large-scale burning of fossil fuels, CO2 ppm stood at 280. By the 1950s it had reached 316 ppm. After breaking the 400 mark in the coming days, CO2 concentration is expected to reach 450 ppm in the next few decades.

Of hitting 400 parts per million, Scripps Institution geologist Ralph Keeling said: “I wish it weren’t true but it looks like the world is going to blow through the 400ppm level without losing a beat. At this pace we’ll hit 450ppm within a few decades.”

CO2 concentrations are clearly at a critical level, so what reaction can we expect from the self-styled ‘greenest government ever’ here in the UK? Taking performance to date as a guide, you’d be right to be worried.

Last year the coalition announced plans to allow the building of 40 new gas plants, as well as the possible fracking of nearly two thirds of England, all of which led some to ask the question “has the greenest government ever just gassed itself?”

The government is taking us further in the wrong direction

The government has introduced the Energy Bill (due for report stage next month), promising to clean up the production of the UK’s electricity, but it lacks a legally-binding target to remove carbon from our electricity system by 2030, which is widely seen as crucial if our low carbon sector is to continue to thrive (‘green’ goods and services provided one third of all growth in 2011-12). There is still hope, however, for an amendment which would re-introduce the target.

George Osborne’s dash for gas shows this government would prefer the UK to run on fossil fuels, rather than clean energy. As such, it is missing the woods for the trees. Cameron is missing the Arctic for the huskies.

A major undercover investigation by Greenpeace late last year, dubbed ‘Energygate’, revealed what can only be described as a plot in the Conservative Party to undo both domestic and international climate commitments.

The government’s own chief scientific adviser, professor Sir John Beddington, last month warned that there is already enough CO2 in the atmosphere to cause more floods and droughts in the UK over the next 25 years. He identified a ‘need for urgency’ in tackling climate change. He said that the later governments left it, the harder it would be to combat.

Internationally, progress is not great. There is still no global consensus on tackling emissions and with climate talks at a stalemate, international negotiations amount to a scary and reckless game of chicken.

All that said, there is still some cause for hope. Last year both China and the USA installed more pollution-free renewable energy than coal. Under President Obama, the US has more than doubled the amount of electricity produced from wind and solar.

So the tools do exist to halt the relentless loading of our atmosphere with CO2. The only question now is if political leaders have the will.

Of course we could do nothing and, just like after the Piocene era, CO2 levels will fall on their own. The only problem is that this could take a few million years – think you can hold your breath?