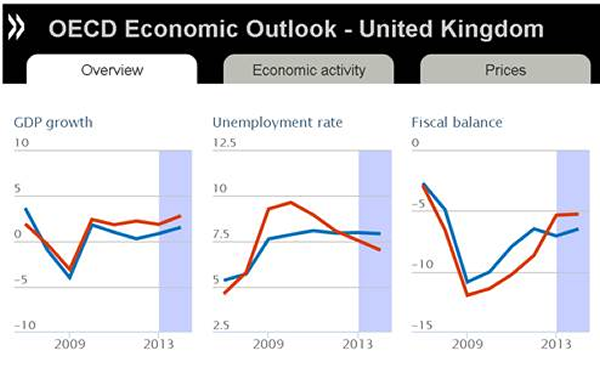 In 2010, the UK and US were both recovering from the global financial crisis but had fiscal balances in deficit by more than 10 per cent of GDP. After gaining office, Britain under the coalition government began an aggressive programme of cuts to public spending and tax rises.

This contributed to a deterioration in growth which fell back from 1.8 per cent in 2010 to 0.3 per cent in 2012. By contrast, the US took its time before making aggressive cuts and saw growth hold steady at around 2 per cent.

The UK’s fiscal balance has now stopped falling and is predicted by the OECD to widen from 6.5 per cent last year to 7.1 per cent this year. The US, by comparison, is expected to see its fiscal balance come down to 5.4 per cent in 2013.

Unemployment trends are also diverging. Having paid a heavy price for the recession in terms of job losses, the US unemployment rate is expected to fall to 7.5 per cent this year and 7 per cent next year. The UK’s rate meanwhile is expected to remain stubbornly at or above 7.9 per cent.

For a more detailed look at why austerity is failing and, indeed, has always failed, Mark Blyth in the current edition of Foreign Affairs is well worth a read.

5 Responses to “A tale of two approaches to austerity”