John Millington
2 April, 2013
A Britain We All Call Home

The Di Canio incident has underlined the need to step up campaigning against fascism, whether in uncovering extremists in the world of sport or entertainment as well as far-right political movements. 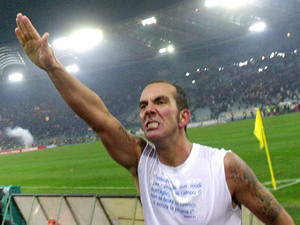 The media storm whipped up over Di Canio’s appointment as Sunderland manager has been far reaching.

From David Miliband, to mainstream anti-racist activists and militant trade union groups, all have taken steps to criticise and in some cases take symbolic action to show their disdain for his appointment.

Even the Daily Star carried a front page questioning the appointment, showcasing Di Canio’s Nazi salute whilst playing in Italy seven years ago.

But instead of universal outrage across the press, which one might expect considering not so long ago Britain along with her allies fought a world war against fascism in Europe, right-wing commentators have turned the story into an attack on the “left,” criticising Di Canio’s detractors.

LBC’s Iain Dale highlighted the so-called hypocrisy of the “liberal left” in emphasing the fact that no one cared about Di Canio while he was Swindon Manager whilst treading a dangerous path of attempting to distinguish National Socialism from fascism.

He concludes by suggesting he would not boycott a team or complain if “a devoutly left-wing socialist” or “Chinese Communist” became a manager of a premiership footballer.

Jonathan Liew in the Telegraph suggests that our obsession with the Di Canio story is particularly British “middle class” pre-occupation and that reminders of the crimes of fascism in the Guardian are all designed to make us all feel better, serving no wider practical purpose.

The question that has to be asked here, however, is this: when did it become taboo to dislike fascists, to criticise them, to remind ourselves of the horrors of the worst economic and political system ever devised?

If people were a bit late coming forward to have a pot shot at Di Canio, does that make their condemnation any less worthwhile?

The fact that there wasn’t much coverage when the GMB, Britain’s third largest union, withdrew its sponsorship of Swindon when Di Canio was manager due to his fascist sympathies is the fault of major newspapers not anti-fascist commentators.

Durham Miners Association leader Davey Hopper, whose group has asked for their banner at Sunderland to be returned in protest at Di Canio’s appointment, was a deep pit miner for 27 years.

I have known and interviewed Davey several times over the last four years and he would be insulted to be labelled “middle class” or to have his association’s decision questioned on the basis of what it “hopes to achieve.”

As difficult as it might be for Liew, Dale and others to understand as I am sure they have never covered a National Union of Mineworkers AGM before, the decision by DMA is based on principle – a principle that dates back to before the greatest crimes of Adolf Hitler and his partner in crime, Italian fascist leader Benito Mussolini.

Opposing fascism whether by pen or sword, is something that goes back to the brigades and the Spanish civil war, when thousands of working class people volunteered to go over to fight fascist dictator Franco and defend the Spanish Republic.

To not withdraw the Durham Miners banner from Sunderland would have been akin to spitting in the face of all those who have fought and died fighting fascism.

Hopper does indeed fit the description of Dale’s “devout left wing socialist” and the kind of society Davey wants, one of peace, equality and workers rights, is the antithesis to fascist ideology.

As for the defence Di Canio has “several best friends who are black” – how many times have we heard that one from somebody after they have made a racist comment?

The BNP and English Defence League all have black members – does this mean that both organisations are any less racist?

To use the other argument, that sport and politics should be kept separate, is to ignore the platform that professional sport gives individuals and their viewpoints.

Similar arguments have been used to allow fascist countries or individuals to benefit from such regimes.

One need only look at World Cup in Italy in 1934, the Nazi Olympics in 1936, the open racism of the IOC towards militant black American sprinters in the 60′s, the breaking of sanctions on Apartheid South Africa by England Cricketers, to see how sport and politics are inseparable.

The Premiership could learn a thing or two from the Greek footballing authorities who recently banned one of their up and coming stars, Giorgos Katidis, from representing the national team due to his Nazi salute at the end of a league game last month.

The Di Canio incident has underlined the need to step up campaigning against fascism, whether in uncovering extremists in the world of sport or entertainment as well as far-right political movements.

38 Responses to “When did it become taboo to protest against fascists?”