Amid the concerted attempts to reinvent the Thatcher years in recent days, an intriguing, counter-intuitive claim has been doing the rounds that rather than being the enemy of coal mining Margaret Thatcher was actually kinder to the industry than previous governments. 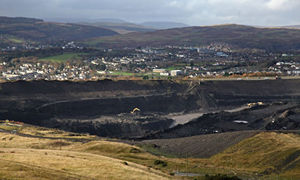 Amid the concerted attempts to reinvent the Thatcher years in recent days, an intriguing, counter-intuitive claim has been doing the rounds that rather than being the enemy of coal mining Margaret Thatcher was actually kinder to the industry than previous governments.

The inference seems to be that the lingering animosity towards Mrs Thatcher, particularly in many former mining communities which have celebrated her demise in passing days, is somehow unfair.

Alastair Heath in the Daily Mail (where else?) argued that:

“The slow demise of coal mining has been a tragedy for many communities, and the cause of much suffering. But more mines were closed during Harold Wilson’s two terms in office than in Thatcher’s three – and yet he remains a left-wing hero.”

The point was echoed over at ConservativeHome:

“Then there is the charge that it was Margaret Thatcher who ‘destroyed’ the coal mines and the mining communities. How many times have the BBC broadcast that claim without refutation? Yet the facts show that far more coal mines closed under the Labour prime ministers Harold Wilson and James Callaghan.”

Unsurprisingly, both are being highly selective with the facts. The historical data shows that while 212,000 coal mining jobs were lost under the 1964-1970 Labour Government, under Mrs. Thatcher’s 1979-1990 government, the percentage decline in jobs was actually double that.

43 per cent of mining jobs went in the 1960s under Wilson while 80 per cent were lost under Thatcher. Also, as the trend rate of economic growth was lower under Thatcher than Wilson (just 2.8 per cent compared to 3.4 per cent) and unemployment was considerably higher throughout the 1980s than the 1960s, redundant miners had fewer alternative job options as a result of Mrs Thatcher’s stewardship of the industry.

As former NUM official Ken Capstick put it in The Guardian this week:

“Miners had always known that eventually any of the colleries would close and were always prepared to accept that as a fact of life and find employment somewhere else within the industry, but Thatcher’s attack was wholesale. It was seen for what it was, nothing to do with economics, but purely an attempt to destroy the National Union of Mineworkers by wiping out the entire industry.’

“Thatcher was hardly a benign force when it came to coal mining, despite what some of her admirers would now have us believe. She accelerated the trend decline in coal for ideological reasons, using the 1984-85 miners’ strike to break the industry while waging a wider battle against organised labour. Indeed, she records her attitude to the miners in her memoir, ‘The Downing Street Years’:

“…it was only by ensuring that they lost face and were seen to be defeated and rejected by their own people that we could tame the militants.’ (P.343)”

So striking miners were infamously described by her as ‘the enemy within’, with the security service MI5 was set loose on them. More recently, allegations that officers conspired to lie in witness statements during the ‘Battle of Ogreave’ – (when 10,000 strikers clashed with 5,000 police at Orgreave Colliery in South Yorkshire in June 1984) – have gained fresh urgency following the revelation that the police used the same modus operandi straight after the Hillsborough tragedy.

But many in mining communities also recall the special callousness directed towards them by Thatcher. Striking miners’ wives were denied hardship payments (which they had always previously been able to claim during a strike), with some reduced to selling wedding rings to feed their families as they struggled during the latter stages of the year-long stoppage.

So this attempt to rehabilitate Mrs Thatcher’s legacy is a revision of history too far. I’m afraid many mining communities continue to despise Mrs Thatcher for entirely sound, evidence-based reasons.