The Daily Mail's reaction today to the tragedy of Michael Philpott's multiple manslaughter of his six children is not only quite disgusting, but it also shows the paper's double standards: 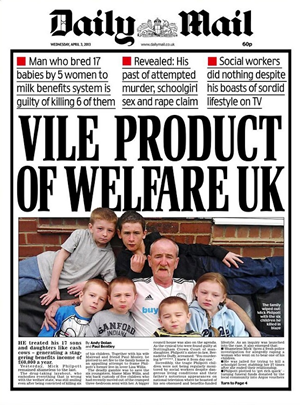 In his 1946 essay ‘How the Poor Die’ George Orwell documented the dreadful conditions in which the poor suffered in 19th century hospitals. Not only did the poor live in a worse state than their wealthier counterparts, but they also very often died in loneliness and squalor.

Fortunately times have changed – thanks in no small part to the welfare state.

Some, however – usually those who have never accepted the welfare state – still dish out wholly different treatment to the dead as well as the living, especially when wrongdoing is involved and when political arguments can be advanced using a tragedy to damn an entire class of people.

The Daily Mail’s reaction to the tragedy of Michael Philpott’s multiple manslaughter of his six children is not only disturbing in its attempt to capitalise on the deaths of six young children for political gain, but it also shows the paper’s complete double standards. Today it reports:

“Michael Philpott is a perfect parable for our age: His story shows the pervasiveness of evil born of welfare dependency. The trial spoke volumes about the sheer nastiness of the individuals involved. But it also lifted the lid on the bleak and often grotesque world of the welfare benefit scroungers — of whom there are not dozens, not hundreds, but tens of thousands in our country.“

A cursory look at the paper’s treatment of another tragedy, however – this time involving a Shropshire millionaire rather than a family on benefits – shows that, in the eyes of the Mail the poor go about dying, or in this case killing, rather differently to the rich:

“The businessman who took his own life yesterday after murdering his wife and teenage daughter was heavily in debt, it emerged today…Detectives believe the mild-mannered family man snapped as he struggled to cope with spiralling debts…Last night his sister Claire Rheade said: ‘It’s unbelievable – he doted on his family, he would never harm them. ‘He was a gentle man who wouldn’t hurt a fly.'”

I’ve looked back through the DM archives but have so far been unable to find a front page damning Hugh McFall as a “vile product of millionaire Britain”. And rightly so, for that would be absurd. According to the Mail, the poor die differently though.

98 Responses to “The Daily Mail: How the poor die and how the rich die”