I have no idea whether or not Paulo Di Canio is a racist, just as I have no clue whether everyone who waddles through Trafalgar Square on May Day with a giant portrait of Stalin believes in the necessity of the Gulag or a bullet to the back of the head. I would, however, hesitate to put such people in positions where they have authority over people who their political heroes regarded as expendable. 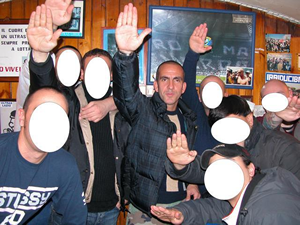 “A fascist but not a racist.”

Those were the words the new manager of Sunderland football club Paolo Di Canio once used to describe himself and they are being bandied about by supporters of Di Canio to bat off criticism of his appointment as Sunderland boss.

Di Canio has the word “Dux”, the Latin equivalent of “Duce”, tattooed on his arm and he has in the past been pictured giving straight arm Roman salutes to Italian fans in his native country.

“I give the straight arm salute because it is a salute from a ‘camerata’ to ‘camerati’,” Di Canio said after one incident for which he was fined seven thousand Euros, making sure to use the Italian words for members of Benito Mussolini’s fascist movement.

Di Canio was appointed manager of Sunderland on Sunday afternoon after the sacking of Martin O’Neil. The most high profile reverberation so far from the decision was reported yesterday by the BBC, which said that former foreign secretary David Miliband had stood down from his post at Sunderland FC because of Di Canio’s “right-wing views”.

From much of the coverage one can surmise two things: Mr Di Canio is not a racist (just a fascist) and Mr Miliband has decided to stand down because the new Sunderland boss is “right-wing”.

And yet there is an elephant in the room. A fascist elephant, if you like.

The problem is that fascism without racism is a bit like wife beating without sexism – one is very much intrinsic to the other. Fascism is not comparable to being “a bit right-wing” like Jeremy Clarkson or Norman Tebbit. Fascism is an ideology based on ultra-nationalism which slips into racial chauvinism and bigotry like a hot knife moves through butter.

I have no idea whether or not Paulo Di Canio is a racist, just as I have no clue whether everyone who waddles through Trafalgar Square on May Day with a giant portrait of Stalin believes in the necessity of the Gulag or a bullet to the back of the head. I would, however, hesitate to put such people in positions where they have authority over people who their political heroes regarded as expendable.

Benito Mussolini rallied against Italians for having “no consciousness of race” and proudly boasted to his mistress on the eve of war with Britain that he had “been a racist since 1921”. There is also the small matter of his sending 6,806 Jews to concentration and death camps and promulgating the “Manifesto of Fascist Racism”, which forbade intermarriage along the lines of Hitler’s Nuremberg Laws.

The only real sense in which Mussolini was not a racist was in comparison to Hitler, who as it happens, he regarded as a teary-eyed “sentimentalist”.

Personally I’d like the bar to be set a little higher, thanks very much.

What an earth, then, do Sunderland football club think they are doing appointing a self-proclaimed fascist to any job at the football club, let alone a managerial role? More importantly, why do those involved in the decision believe they have any right to absolve supporters of Benito Mussolini of the historical consequences of their murderous ideology?

The answer appears to be that if one says the magic word “football” everything is fine. Appointing a self-proclaimed fascist who thinks Mussolini a “deeply principled individual” is fine. Each and every criticism of the above is “politics”, and therefore does not apply to the “beautiful game”.

85 Responses to “Paolo Di Canio: “a fascist but not a racist”. That’s ok then”