Economic data is coming thick and fast. Sandwiched between last week’s poor unemployment data and Thursday’s forthcoming results for GDP in the first quarter of the year, public finance figures were published today. They show that George Osborne has dodged a bullet. 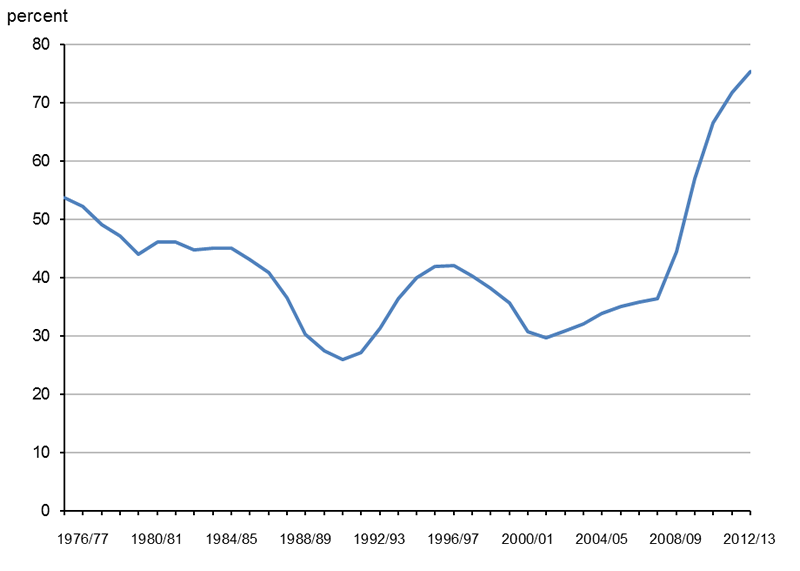 Economic data is coming thick and fast. Sandwiched between last week’s poor unemployment data and Thursday’s forthcoming results for GDP in the first quarter of the year, public finance figures were published today. They show that George Osborne has dodged a bullet.

Public Sector Net Borrowing fell slightly from £120.9 billion in 2011/12 to £120.6 billion in 2012/13. The margin is incredibly tight but the Chancellor can claim that, even excluding the Asset Purchase Facility from the Bank of England and the Royal Mail pension fund, borrowing is falling.

But having claimed that the “bulk of the structural deficit” would be eliminated in the current Parliament, it is cold comfort. Borrowing is up a staggering £245 billion more than originally planned. Net debt is now 75.4 per cent of GDP, up from 57.1 per cent when George Osborne took office.

The small print, as ever, provides some interest. Those like John Redwood and Fraser Nelson, who claim that public spending is actually rising, will be disappointed.

The pain of austerity is plain for all to see. From March 2012 to March 2013, current expenditure fell by 4.7 per cent. When increases in interest of a staggering 51.2 per cent and in net social benefits of 5.6 per cent – the costs of economic failure – are taken into consideration, “other spending” fell by 11.1 per cent.

Some of this will be the underspend that George Osborne announced in last month’s Budget but most is due to cuts to departmental spending on police, further education, flood defences, and local services.

After last week’s credit rating downgrade, the IMF calling for an easing of austerity and unemployment rising again, George Osborne will welcome this glimmer of good news. But the underlying truth is that his strategy is failing to do what it said on the tin.