It's increasingly becoming accepted, even on the left, that immigration to Britain under the previous government had some negative consequences, one of which was to depress wages and increase job scarcity for the indigenous population. 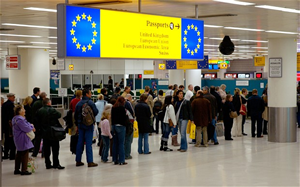 It is increasingly accepted, even on the left, that immigration to Britain under the previous government had some negative consequences, one of which was to depress wages and increase job scarcity for the indigenous population.

Tim Montgomerie has repeated the claim today in a piece for the Times (£). Under Labour, he writes, “immigration rates soured, depressing the wages and job chances of working-class Britons”.

The first misunderstanding here is that the economy has a fixed number of jobs, sometimes known as the “lump of labour” fallacy.

In reality, just as immigration may increase competition for jobs it can also create new jobs.

A 2008 study found that an increase in the number of migrants corresponding to one percent of the UK-born working-age population in the years 1997-2005 resulted in an increase in average wages of 0.2 to 0.3 percent.

We are talking very small percentages here, however, and the study also found that migration led to a rise in the wages of medium and high paid workers. Most of the published evidence has also found no correlation at all between immigration and depressed wages.

Another study carried out in the same year by Jonathan Portas of NIESR found “little hard evidence that the inflow of accession migrants contributed to a fall in wages or a rise in claimant unemployment in the UK between 2004 and 2006 (when the study was carried out)”.

And as Jonathan Wadsworth, of Royal Holloway College and the government’s independent Migration Advisory Committee, has said:

“It is hard to find evidence of much displacement of UK workers or lower wages, on average.”

The below chart shows the correlation between wage growth at the 10th percentile (ie very low paid workers) and the proportion of migrants from the new EU member states at local authority level. As you can see, it’s hard to see any link between the number of migrants in an area and wage depression. 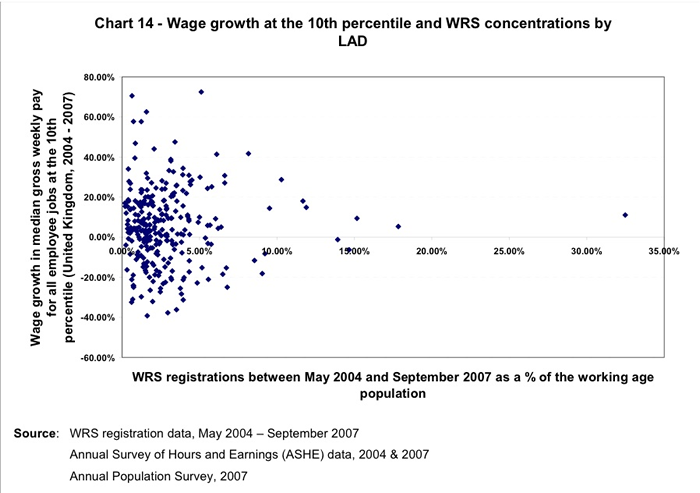 Concerns about wage depression must also be offset against the benefits migrants bring in terms of the social welfare pot. A 2009 study found that A8 immigrants – that is those from the Czech Republic, Estonia, Hungary, Latvia, Lithuania, Slovenia, Slovakia, and Poland – paid 37 per cent more in direct or indirect taxes than they received in public goods and services.

Of course, low wages should be a concern for all progressives, and we should not shy away from talking about immigration and objectively assessing its costs/benefits.

However considering the paucity of evidence suggesting migration depressed “the wages and job chances of working-class Britons”, there are far more pressing concerns such as ensuring minimum wage legislation is enforced and where possible that employers pay a living wage.

Fear-mongering implying that immigration under the last government was in any way a serious problem or worse “out of control” should simply be ignored: the figures don’t support such concerns.

40 Responses to “Did immigration really ‘depress the wages and job chances of working-class Britons’?”