The sickening killing of 27 year old Mido Macia in South Africa this week brought to mind the white supremacist murders in the US which amounted to ‘lynchings’. This, together with the recent high profile rape and murder of Anene Booysen - and even the Oscar Pistorius case - point to a latent violence in the country that the government seems reluctant to tackle. 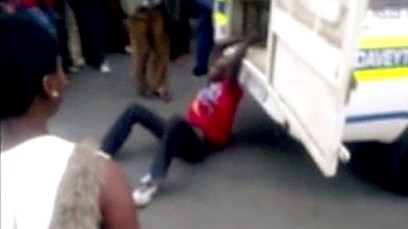 The sickening killing of  27 year old Mido Macia in South Africa this week brought to mind the white supremacist murders in the US which amounted to ‘lynchings’.

James Byrd Jr, a black man, was tied to the back of a pickup truck in Texas in 1998 by three men, two of whom were confirmed white supremacists, and dragged at speed to a gruesome death.

As recently as 2010, Anthony Hill, also a black man, was dragged almost ten miles by a white male after being shot, and the matter is now being investigated as a hate crime.

Such killings are the ultimate demonstration of control, power, contempt and hate for the victim.

But in post-Apartheid South Africa, where the police are black, the world, and the people hoped and perhaps dreamed of better.

Black people, who suffered grievously at the hands of the South African police under Apartheid, have a right to expect better. But sadly the corrupting influence of power seems to have transcended racial solidarity in the killing of Macia.

To see black policemen mimic the racist modus operandi of white supremacists is particularly galling. It also sends a clear message to poor blacks that “we are your masters now“.

The brutal video shows that there is good coordination between the policemen who rapidly tether Macia to their vehicle and are chillingly coordinated in their actions. It does not look like the first time they have done it; they appear much practiced in this form of torture and humiliation.

In South Africa, violence is always bubbling just beneath the surface; and when race, poverty, and power are added to the equation things can quickly boil over, as seen in the massacre of Marikana miners of 2012.

As with that atrocity, an investigation has been announced following public outcry, with remarks of condemnation from Jacob Zuma.

The recent high profile rape and murder of Anene Booysen – and even the Oscar Pistorius case – point to a latent violence in the country that the government seems reluctant to tackle in a systematic way. It is time for South Africa to join the dots and see the bigger picture.

13 Responses to “Why are South African police mimicking white supremacists?”