When the money spent on Trident could be used to quadruple our investment in renewable energy, or scrap tuition fees for 30 years, or fully fund all A&E services in hospitals for 40 years – this is one good cut that the government can make. 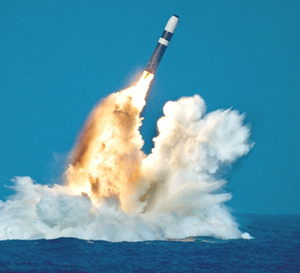 In tough times, tough decisions must be made. Such is the mantra peddled by George Osborne and co – reinforced in last week’s budget which unveiled further public spending cuts.

But while it is happy to push these cuts onto crucial public services, the government refuses to make what most people consider a ‘good cut’.

We spend around £3bn annually on running Trident, Britain’s nuclear weapons system. Just in one year.

But not only are the Conservatives happy to pay this amount, they’re pushing for a replacement of the ageing Vanguard Class submarines (which carry our nukes) to the tune of more than £100bn.

That’s £20-25bn over the next few years just to build them (to which you can add the £3bn per year running cost of our current system), £3bn per annum running costs over the next 30-40 years, and then an estimated £25bn in decommissioning.

That’s before we get into the Ministry of Defence’s ubiquitous overruns on major projects: typically delivering them around 40 per cent over-budget.

On Easter Monday – April Fools’ Day no less – CND will be continuing a tradition which first brought the issue of Britain’s nuclear arsenal to prominence from 1958 onwards: protesting at the Atomic Weapons Establishment (AWE) in Aldermaston. We’re calling on the government to see sense, with the message: ‘Scrap Trident: Time to Stop Fooling with Nuclear Weapons’.

And the issue is not just the untenable economics of Trident replacement – it’s also strategically redundant. The government itself has said that nuclear weapons are not relevant to the kind of security threats we face. In its National Security Strategy in 2010, the threat of state-on-state nuclear attack was downgraded to a tier-two risk.

And many in the military agree. Senior figures in the armed forces have said Trident is “completely useless” and concern is growing in the military and Whitehall over its ruinous impact on the MoD’s ability to fund conventional defence forces.

Former defence ministers have also been queuing up to highlight the wrongheadedness of it all. Erstwhile Conservative defence secretary Michael Portillo has said that Trident is “completely past its sell-by date”, that it’s “neither independent… nor any sort of deterrent” to the threats we face, and that it is “entirely for reasons of national prestige”.

And of course he’s right in also describing it as “proliferatory”.

Meanwhile, Lord Des Browne (previously Labour’s defence secretary) has called for the end of constant patrols by nuclear submarines – the doctrine of “continuous at-sea deterrence” – while  Nick Harvey has said it is “complete insanity” that our strategic posture should be based on a Cold War premise of the ability to “flatten Moscow”.

When the money spent on Trident could be used to quadruple our investment in renewable energy, or scrap tuition fees for 30 years, or fully fund all A&E services in hospitals for 40 years – this is one good cut that the government can make.

4 Responses to “Trident: one good cut the government could make”