In yesterday's budget George Osborne announced that the personal income tax allowance would be raised to £10,000 from next year, earlier than 2015 as originally planned. Superficially taking people out of income tax does sound like a tantalising prospect - poorer people will have more money in their pockets, will they not? There are two major problems with this. 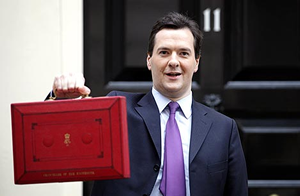 In yesterday’s budget George Osborne announced that the personal income tax allowance would be raised to £10,000 from next year, earlier than 2015 as originally planned.

This has been lauded by some in the media as a progressive measure. Cue the Telegraph:

The Government had planned to raise the threshold to £10,000 by the end of this parliament, but George Osborne fast-tracked the plan to help low-income households.

And according to yesterday’s Mail:

Superficially taking people out of income tax does sound like a tantalising prospect – poorer people will have more money in their pockets, will they not?

There are two major problems with this.

As the below graph shows, the greatest percentage change in net income from the personal tax free allowance of £10,000 is seen by those on the upper end of the income scale – not, as is often claimed, low earners. The important line is the purple one (or is it maroon?), which accounts for the policy as proposed by George Osborne.

The blue line represents the Liberal Democrats original proposal which Osborne has adopted without the corresponding adjustment of the higher rate threshold. 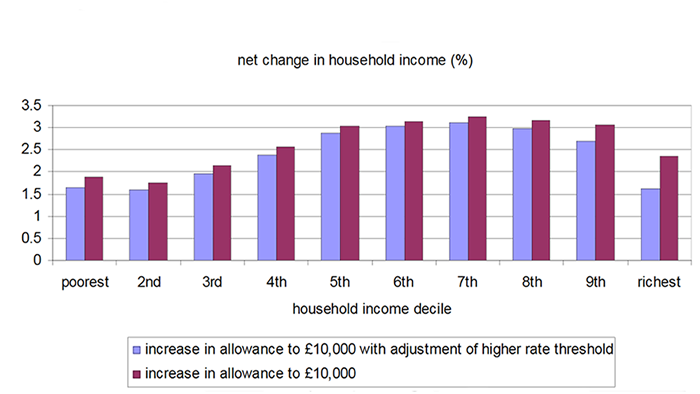 For one thing, the policy only benefits those who earn enough to pay tax. Many individuals have income below the income tax threshold of £8,105. Analysis carried out for Left Foot Forward in 2010 found that some three million households in the poorest quarter of the household income distribution would not benefit from raising the personal allowance to £10,000.

That’s right, three million of the poorest households gain nothing from the change.

As the report also concludes, increasing the personal allowance serves to increase the gap between the bottom and the middle, resulting in low income households falling behind relative to the middle.

The reason it benefits those on the right of the graph more than it does those on the left is because a raise in the personal tax allowance cuts tax for everyone since all benefit from a higher tax threshold.

Another concern for the Left should be the move away from the idea of contribution. An important facet of the welfare state is the notion that everyone contributes into a pot which is then available in times of need.

Indeed, one of the challenges for progressives in the coming years will be making the connection in the minds of voters between the tax they pay and the benefits they receive from the welfare state. Or as the American Jurist Oliver Wendell Holmes once said, that taxes are the price we pay for a civilised society.

Taking people completely out of income tax has the opposite effect, as Right-wing Tories are probably quite aware – their Liberal Democrat counterparts should know better.

It’s not only those on the Left who have in the past expressed concern about increasing the personal allowance. Here is David Willetts in 2005 (page five):

Increasing the threshold cuts the tax bill for everybody. It takes some people out of income tax, but it is worth most to people who are still paying income tax and get the full benefit of the higher threshold. When I asked the Treasury last year how much it would cost to raise the personal tax allowance to £10,000, it estimated the cost at £30 billion. Of this, only about £2 billion was spent on people who are taken out of tax altogether and it is worth least to people on low incomes who don’t get the full value of the policy…My conclusion is that we should both reform our tax system and help poor people. But these are different problems requiring different solutions (The Times, 23 June 2005).

20 Responses to “The £10,000 personal tax allowance: anything but progressive”