Uncertainty, fear and bewilderment stalk the streets of Italy following an election in which the system failed to produce outright winners, reports Shamik Das. 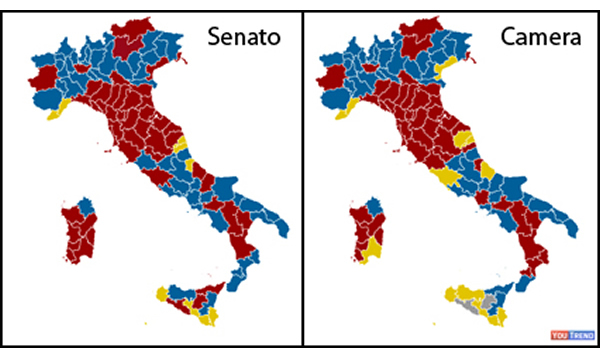 Uncertainty, fear and bewilderment stalk the streets of Italy following an election in which the system failed to produce outright winners, reports Shamik Das from Rome

Pier Luigi Bersani’s centre-left coalition looks assured of a majority in the Chamber of Deputies, with Silvio Berlusconi’s centre-right alliance and wildcard Beppe Grillo gaining enough seats in the Senate to deny him a majority – even with the support of prime minister Mario Monti, whose continuity centrists trailed in fourth.

Turnout is reported to be around 75 per cent, the lowest since the Second World War.

It was an initial picture that, as soon as the first results came in and more ballots were counted, looked more and more wrong, with Grillo’s rise and rise and Berlusconi’s rise from political death the stories of the count. Bersani’s party appeared the most disappointed, having led for so long, and indeed leading the final vote but denied a majority in both houses.

So, what happens now?

Grillo, in his initial reaction (livestreamed on is web channel, naturally), described his FSM as the “great obstacle” in Parliament to a PD-PL grand coalition, adding:

“I am tired. In three years and a few months, without money, we have become the No 1 party in Italy. Nobody can beat us…

“It’s been a wonderful adventure and we will do everything we promised in the election campaign.”

In a bizarre turn, Monti described himself as “satisfied” with the election, despite getting less than 10 per cent, one of the worst ever results of an incumbent in democratic history. He lambasted the system, saying no country has such a bad electoral law as Italy, adding Grillo’s result was beyond expectations, but not surprising given the dissatisfaction towards the main parties.

“It is clear to everyone that this is a very delicate situation for the country. We will handle the responsibilities that these elections have given us in Italy’s interest.”

Earlier, Partito Democratico deputy leader Enrico Letta told reporters gathered at the PD’s election centre in Rome’s Casa Dell’Architettura the vote was a “rebellion” of the electorate. He said it was the responsibility of the party that wins in the lower house to try to form a government. The election results created a borderline, he said, adding re-running the elections is not the solution at the moment, and President Napolitano should help the parties form a government.

Looking ahead, three options present themselves: a ‘grand coalition’ of national unity (unlikely); the installation of another technocratic government (highly unlikely); or fresh elections in a few months (the most likely) – though the PD will want to try and get reform of the Italian electoral system through parliament in the interim, so as to make a repeat of the current deadlock less likely in the future, though Berlsuconi will likely block such a deal.

In such a circumstance, as seems distinctly possible, the spotlight will fall more heavily on Grillo, who will have to make up his mind whether he wishes to govern, adopting a certain degree of credibility and abandoning some of his more fanciful policies – or roll the dice and force another election, in which his popularity and vote share could grow, or reality could dawn and he could sink, which for him and his supporters would be no laughing matter.

In the current uncertainty, expect to see and hear plenty more of Beppe Grillo; and we’ll have more reaction and analysis from Italy later this week on Left Foot Forward.

2 Responses to “Deadlock in Italy as Grillo, Bersani and Berlusconi share the spoils”