Respect MP George Galloway walked out of a debate at Christ Church college at Oxford University last night after being asked a question by an Israeli citizen. Galloway's response before walking out was "I don't debate Israelis". 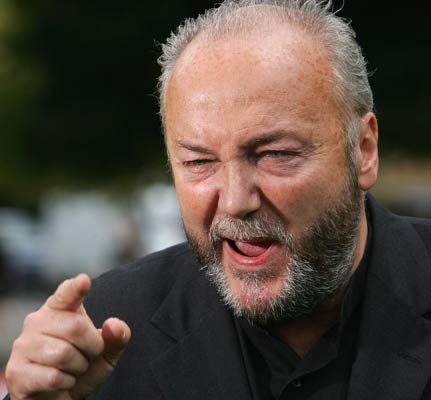 Given that George Galloway has been trending today on Twitter, I gather many of you will have seen the video from last night of the MP for Bradford West refusing to debate a student, one Eylon Aslan-Levy, because he is an Israeli citizen.

This morning he tweeted this:

But has Galloway always felt this way towards Israeli citizens?

Take Sheikh Raed Salah, for example. In 2012 Salah visited the UK to attend and host a number of pro-Palestine events. He was permitted to stay in the UK for six months and as an Israeli citizen did not need a passport to do so.

However the Home Secretary Theresa May saw fit to detain Salah in his hotel in London and then in an immigration centre for 21 days.

Later he won his application to be released on bail, no doubt causing embarrassment to May and her colleagues.

Before being arrested he was scheduled to “participate in a speaking tour with Jordanian Muslim Brotherhood figure Ahmed Nofal, Viva Palestina leader George Galloway and other radicals [as well as] speak at a meeting at the UK Parliament alongside British MPs.”

Despite having common ground, did Galloway gasp a sigh of relief for not having to share a platform with an Israeli citizen? No, he broadcast an interview with Salah’s lawyer, Farouq Bajwa, on his show for PressTV, where at he calls Salah “one of the more important figures in the entire Muslim world”.

To which Bajwa replies:

“It’s a very good question and I’m afraid I don’t know the answer to that one, I can only speculate that the British government in this instance is trying to be more careful about Israel’s interests than Israel is itself.”

There is no confusion here, Galloway knows this is an Israeli citizen he is talking about here. Indeed George, clarifying what the nature of why Salah has been detained, says:

“And is this just for things that he has said? He hasn’t done anything wrong; he’s free to speak publicly in what they call Israel any day of the week.”

It should also be noted that Galloway sits on the advisory board with Salah for the Global March to Jerusalem. Respect, Galloway’s party, also called for urgent action after the arrest of Salah accusing the “ConDem government [of] hypocrisy of the worst kind”.

Finally, and as an aside, the Northern Islamic Movement in Israel, which Salah is head of, put out a statement after the death of bin Laden that said (via Google Translate):

“We in the Islamic Movement condemn the assassination operation against the sheikh, the martyr Osama Bin Laden, if [reports are] true, at the hands of the American security arms.

“The assassination, if true, proves collusion of mercenaries who have sold their consciences to cursed Satan.”

I make no judgement here about Palestine, Israel, or the arrest of Salah, nor on Galloway’s politics.

I point these things out to show how Galloway feels about other citizens of Israel who he agrees with, hopefully to shed light on why it is he felt it necessary to abandon a legitimate debate in Oxford last night.

15 Responses to “George Galloway does debate with some Israelis”