It is time for Des Browne and others to follow the logic on Trident, writes Kate Hudson, general secretary of the Campaign for Nuclear Disarmament (CND). 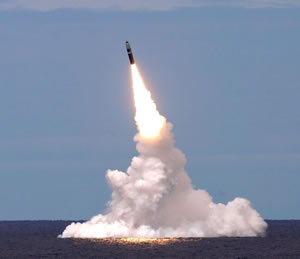 Des Browne’s recent outspoken opposition to like-for-like Trident replacement is to be welcomed.

As the defence secretary who introduced the pro-replacement White Paper in 2006 and pushed the Trident resolution through parliament in 2007, this is a notable change of heart. But watching his progress on this subject over the past few years, I’m not surprised he has come to this conclusion.

In October 2009 he was one of the founders of the Top Level Group of UK Parliamentarians for Multilateral Nuclear Disarmament and Non-Proliferation. This project built on a number of international initiatives attempting to reduce the salience of nuclear weapons in foreign and defence policies.

One of the first, and most surprising, of these was spearheaded by US Secretaries of State Kissinger and Shultz in 2007. And this tendency was strengthened by President Obama’s rapturously-received Prague Speech in April 2009 outlining his vision of a nuclear weapons-free world.

What is most significant about the British initiative is it comprises almost all foreign and defence secretaries from the last two decades, senior military figures and two former NATO secretary generals.

Similar bodies exist in Europe and across the world. Of course this is a good thing, but sooner or later one really has to make a judgment on the value of such initiatives according to their results.

Whilst these figures are big on the reasons why nuclear weapons are bad in the abstract, they seem to be short on actually advocating that their own country get rid of them. Indeed they often support the modernisation or replacement of their own nuclear systems ‘whilst others still have them’.

What we face is almost a fetishisation of the concept of multilateralism.

Of course we want multilateral disarmament: the only solution to the problem of nuclear weapons is global abolition. But when this is reduced in debate to the level of ‘but we’ll keep ours while others still have them’, where does one break out of this circular argument? Who will take the first step?

If we don’t need them and can’t afford them and they make the world more dangerous, why on earth would we want to keep them just because others do?

Indeed, Des Browne has very clearly outlined the risks associated with nuclear weapons: their lack of relevance in meeting our long-term threats, their opportunity cost and – as also stated very clearly in his contribution to the recent House of Lords debate – the danger that our insistence on nuclear weapons for our security will contribute to proliferation elsewhere.

The clarity and force of his arguments are therefore rather at odds with his conclusions – that we should opt for a cheaper nuclear system, maybe with less subs or an end to continuous at-sea patrol.

Remaining a nuclear power with a new system doesn’t seem to fit the bill Des himself has outlined – for a safer and nuclear-free world without the cataclysmic weaponry of a by-gone age. The logic of Des Browne’s argument is that there should be no Trident replacement and that is the position he needs to take up and champion.

It is that step which would be Britain’s transformative contribution to the multilateral process, to boosting the non-proliferation regime he values so highly – and a true indication we are ready to address Britain’s security needs in the light of the threats we actually face today.

4 Responses to “Trident: Time for Des Browne and others to follow the logic”