It is better to have the BNP in politics than to have their supporters outside the process, becoming ever more violent and disengaged, writes Kevin Meagher. 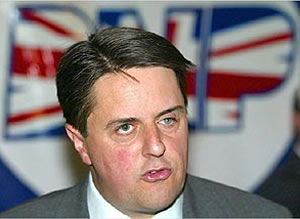 Lyndon Johnson’s famously robust advice that it’s better to have an enemy inside the tent pissing out, than outside pissing in is exactly how we should respond to the news the British National Party is on its last legs.

Earlier this week the Independent reported on a speech BNP leader Nick Griffin made in Coventry last weekend, witnessed by respected academic Matthew Goodwin from Nottingham University, who specialises in the far right.

…urged every local BNP branch to have “an eBay officer” – presumably to keep an eye out for bargains that could fill the party’s empty coffers. He also shared a fund raising idea with his audience. “We are going to begin collecting scrap. Have you any idea of the price of copper?” he said.

Leaving the subject of money, Mr Griffin informed his audience: “We have produced an invaluable document, it’s called ‘what to do if you get arrested’.” His remarks were noted down by Matthew Goodwin, an associate professor at Nottingham University, and published online.

They suggest that BNP finances have not improved since April, when the party declared that at 31 December 2010 it owed £582,961 and had £15,846 in the bank. Since then, the party has seen a decline in its political fortunes.

For good measure, Griffin’s tale of penury stretched to feeding his family on a rabbit that had been killed on the road.

A struggling BNP will find few mourners across the political mainstream, however there should be no champagne corks popping at the thought of their demise.

For political respectability to no longer be a consideration for the far right would surely see a return to the militant thuggery of the past. Put simply, it is better to channel their fear and loathing into our political system than to shut it out and drive far right politics underground.

It is surely better to have a democratic light permanently shone on the BNP to avoid its adherents abandoning politics altogether and retreating back to “Paki-bashing” and harassing Jewish people. Especially as figures from the Association of Chief Police Officers show race hate crimes have fallen every year between 2009-2011 (last available figures).

Just as Mo Mowlam was absolutely right to walk into the Maze prison and meet loyalist prisoners in a bid to get them to buy in to the Northern Ireland peace process back in 1998, so too, it is preferable even the extremities of our political system are brought into our democratic orbit, even those with whose views we may disagree with entirely.

Anyway, there is a question over exactly how down on their uppers the BNP actually is. The party was certainly fined by the Electoral Commission in 2007 for the late filing of its annual accounts and in 2010 the commission launched an investigation following concerns over the ‘adequacy’ of their 2008 records. In the end, however, the investigation proved inconclusive.

What is clear is the BNP’s income halved between 2010 and 2011, while its spending decreased by two thirds.

It is not the force it briefly threatened to become. Truth to tell, there is, and never has been, much danger of the BNP breaking through is a serious way. They managed to get two MEPs elected at the 2009 European elections, but it says more about the low turnout and the public’s disinterest in the European Parliament than it does for the BNP’s political vitality.

They have come nowhere near winning a seat in parliament and their best bets in local government, in places like Stoke, Burnley, and Barking and Dagenham, have long since receded as prospects.

The overplaying of their electoral significance, has, unwisely, avoided the political mainstream taking ownership of issues like community cohesion and immigration.

So the BNP might be road kill – metaphorically and literally, judging by Nick Griffin’s culinary habits – but we should react with trepidation if they are. What follows may be worse.

• Griffin runs for the hills when confronted with fraud allegations – October 11th, 2011

6 Responses to “Comment: So the BNP’s going out of business? Be careful what you wish for”