A look at the Beppe Grillo phenomenon, with the comedian & founder of the anti-establishment Five Star Movement set to play kingmaker in the Italian elections. 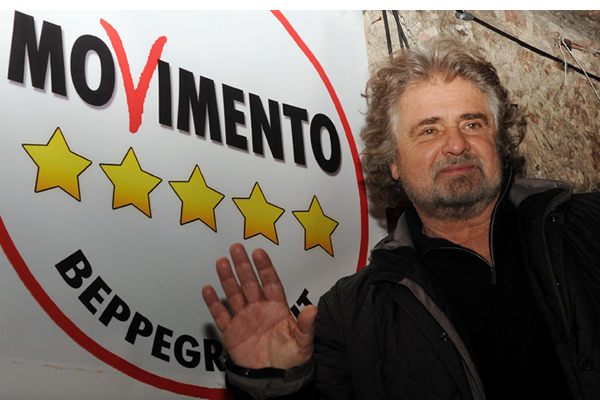 Shamik Das will be reporting from Italy for Left Foot Forward as next week’s parliamentary elections approach. Today he looks at the Beppe Grillo phenomenon, with the comedian and founder of the anti-establishment Five Star Movement set to play the role of kingmaker

Silvio Berlusconi finally has a rival for the role of Roman jester, a larger-than-life fellow counterweight to the more serious Pier Luigi Bersani and Mario Monti, complete with controversial past and reality-lite policies… Step forward Beppe Grillo, the man who could hold Italy’s future in his hands.

Grillo’s FSM is riding high in the polls, at up to 17.5% (six points higher than the Monti coalition) in the latest SWG survey of voter intentions, which puts them on course for 10% of the seats in both the Chamber of Deputies and the Senate. In the event of a Monti-Bersani alliance, Grillo could hold the key to the stability and duration of such a coalition.

Grillo made his political career almost entirely online, using social media to raise funds, grow his movement and wreak havoc on the establishment, including, in 2007, a mass “Vaffanculo-Day Celebration”. His blog remains one of the most powerful, most read in the world, devastatingly simplistic, with features including a list of convicted Italian parliamentarians, enabling him to stake his claim to the anti-corruption mantle.

But what lies behind the anti-politics, outsider activist schtick, and will his support hold?

Bersani’s Partito Democratico dismiss Grillo as “trendy, sexy, lightweight”, a poseur whipping up crowds into a frenzy by telling them what they want to hear, promising the undeliverable, raising false hope; naked, crass populism without a credible solution in sight.

“His non-traditional, populist movement varies from extreme right to extreme left. Their support is not deeply rooted, it’s non-ideological and very light. If you listen to a Grillo supporter for 10 minutes, then talk to them for five, 50 per cent of them will change their mind.

“It’s considered an easy vote, voting Grillo is the easiest way to say ‘f*** off’ to everyone… The movement was born on the web, and is now holding rallies, but the web is still the best place to meet them all and engage; it’s not as useful meeting them at his rallies.”

“There are a huge number of ‘anti’ voters, against everything. The next big thing is Grillo, I wouldn’t be surprised if Grillo takes votes off Berlusconi. Voting Grillo has become, in the final few weeks, a trendy attitude – if everyone does the same, you just follow.

“They’re libertarian, anarchist, anti-establishment… To them, the system is bankrupt, everything; it’s a revolutionary message.”

As Global Post notes, that “revolutionary message” has the die hards purring at his feet, however fanciful some of his ideas may seem:

M5S proposals are driven by idealism, from free Internet for everyone and electronic tablets for all school children, to launching a green economy, tax cuts, reducing the working week to 20 hours and revolutionising health care.

The young candidates jostling for parliament seats say the aim is to swap the PIL (Gross Domestic Product) with the BIL – “Gross Domestic Happiness”.

We’ll find out next week whether a 20-hour week or “Gross Domestic Happiness” are more than just slogans, whether the FSM’s “pop-u-list-a” policies make it beyond the election campaign, and whether Grillo really will be the Kingmaker in the pack.

10 Responses to “Beppe Grillo: The demagogic comedian who could be Italy’s kingmaker”