After sustained protests about the flying of the Union flag over Belfast City Hall, they are now threatening to spill over into Scotland. 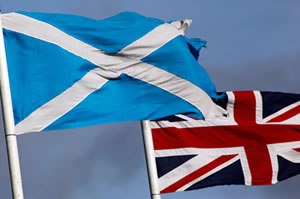 The Herald is today reporting demonstrators supporting protests against the decision by Belfast city council to no longer fly the union flag over the town hall every day are to set their sights on Scotland’s deputy first minister, Nicola Sturgeon.

As the minister charged with taking forward work on an independence referendum, protesters, according to the report, are preparing to demonstrate outside her constituency office in Glasgow a week on Saturday.

One unnamed demonstrator is quoted by the paper as saying the protest would be a “no to independence and to protect the union”, adding the pro-union “Better Together” campaign did not represent their views.

A further protester is reported to have written on Facebook:

“All the rallies have been peaceful but enough’s enough. Sturgeon is forgetting her history and needs reminding. We’re standing firm with Ulster as we have since 1912.”

Meanwhile, more than a month since the decision was taken by Belfast city council, ten police officers were last night injured by missiles and petrol bombs thrown at them  on Albertbridge Road  in Belfast during a loyalist protest against the union flag restrictions. A car was also set on fire in nearby Templemore Avenue.

It comes as the Belfast Newsletter reports Willie Frazer, a high profile advocate for victims of republican violence in Northern Ireland, has been elected “official spokesperson” for the “People’s Forum”, a body established to represent flag protesters across Northern Ireland.

Outlining the immediate aims of the group, Frazer commented:

“We unanimously supported a return to direct rule and we agreed we will not be talking to politicians until they re-engage with people on the ground.

“We are saying that the flag has to go back up on Belfast city hall; one-sided inquiries about the past have to stop; the demonisation of the security forces [during the Troubles] has to stop and there must be an inquiry as to how the £1.5bn peace money from Europe was spent. Who got it?”

Commenting on the challenges the forum could pose for DUP leader Peter Robinson and UUP leader Mike Nesbitt, in its editorial, the Belfast Telegraph observes:

“The proposed unionist forum could be a two-edged sword for Robinson and Nesbitt. Having called on all groups to give views, they may be confronted with demands which will test their resolve as leaders of the main unionist parties.”