Support for an independent Scotland has hit its lowest point since the establishment of a Scottish Parliament in 1999 according to new polling data. 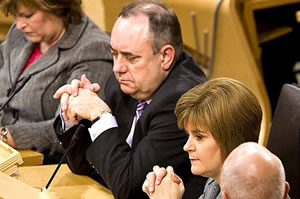 Support for an independent Scotland has hit its lowest point since the establishment of a Scottish Parliament in 1999 according to new polling data.

Data from the Scottish Social Attitudes Survey, carried out between July and November last year, shows 23% of people in Scotland now think it should become an independent state. This is equal to the previous low recorded in 2010, and represents a drop of nine points on the 2011 figure of 32%.

The findings of the 2012 survey also suggest fewer Scots are optimistic about the potential consequences of independence than 12 months ago.

In 2011, 51% thought independence would give Scotland a stronger voice in the world; that figure now stands at 42%. The proportion who believe independence would mean people in Scotland would have more pride in their country has also fallen from 67% to 55%.

Other key findings include:

• 59% said that they would be either “quite” or “very” worried if Scotland became independent, up from 46% in 2011. Just 21% say they feel confident about the prospect;

• Only 19% believe independence would reduce the gap between rich and poor, with 25% saying it would increase and 47% believing it would make no difference;

The findings, however, will prove food for thought for those who oppose the idea of including “Devo-Max” on the ballot paper in the 2014 referendum with 63% of those Scots responding expressing their wish the Scottish government should have more influence over how Scotland is run.

Crystallising the slippage in the polls the pro-independence camp is now facing, Professor John Curtice, of the Scottish Centre for Social Research (which produces the attitudes survey), explained:

“The proponents of independence have apparently struggled to capitalise on the resulting opportunity to persuade Scots of the merits of their case. Instead more voters appear to have become concerned about the prospect of leaving the UK.“

Rachel Ormston, director of the Scottish Social Attitudes Survey, went on to warn, however, that the results contained challenges for both sides of the debate, saying:

“The ‘Yes’ campaign still needs to convince a much wider section of the public that independence will bring real benefits, especially for Scotland’s economy.

“But unionists need to recognise there is a substantial gap between the public’s perceptions of Holyrood’s current powers and their preference for it to be responsible for most of Scotland’s domestic affairs.”

“Polls like these should not give supporters of Scotland within the UK cause for even one moment of complacency.

“While these newest figures are obviously causing concern for the anti-UK campaign, who are planning a big money re-launch, we will continue to work hard and get our positive message out to the Scottish people.

“This is the biggest battle in Scottish political history and all those who believe Scotland is better together in partnership with the UK need to stand up and be heard.”

Meanwhile, Blair Jenkins, chief executive of Yes Scotland, pointed to the fact much of the survey had been conducted before the singing of the Edinburgh agreement last year and the introduction of Westminster’s welfare changes which he said would make one million Scots worse off.

Recognising the hard work the campaign now has on its hands, he continued:

“A Yes vote is the way for the Scottish people to get the control over the future that they want.

“But we in no way minimise the hard work that we must do to take our independence campaign successfully across the referendum finishing line next year. We have to persuade those who believed that devo-max was their preferred choice, not to mention the one in four undecided voters still out there.

“This debate has a long way to go and we at the Yes Campaign are confident that we will deliver a positive result in autumn 2014.”

2 Responses to “Support for independence slumps”