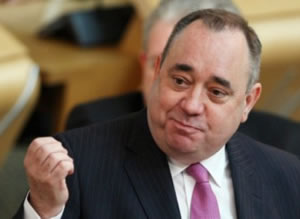 Just a matter of hours after Alex Salmond argued this week it is David Cameron that now poses the biggest threat to Scotland’s position in the European Union, EC President José Manuel Barroso has rebuffed attempts for by Scottish ministers to discuss with him EU membership status of an independent Scotland.

Responding to the request, however, Commission Vice President Maros Sefcovic concluded discussions at this stage would not prove useful.

In rebuffing Sturgeon’s request, he explained:

“The European Commission has consistently refrained from expressing a position on questions of internal organisation related to the constitutional arrangements in the member states.

“At the present stage in the absence of a precise scenario, President Barroso has, therefore, asked me to signal that he would not be in a position to usefully discuss this further with you.”

Responding to the letter on a blogpost, the deputy first minister has drawn attention to the phrase in the letter saying Barroso would refrain from commenting on “any specific situation in relation to any member state”. This, she argued, showed last month’s comments by Barroso “were not actually meant to be specifically about Scotland at all”.

“Fine. That is helpful and effectively reasserts the Commission’s previous position of neutrality on this issue. The Commission have moved back into neutral gear.

“The letter goes on to argue that since they don’t have a position on a particular case then there is nothing usefully to be gained from a meeting at this stage. That’s a pity since the world has moved on even since December.”

Speaking to ScotsPolitics.com, the Scottish Labour MEP Catherine Stihler (who made the Freedom of Information request for the information), was critical of the time taken to reveal the truth.

“I had a baby in the time it took to get this answer, but I’m so glad I persisted. In politics you have to keep asking questions and keep chasing the answer. In this case it was to get an answer to a question that impacts on Scotland’s future.

“Now, if you’re in government you have a responsibility to the people, and if you want to make these huge complex changes, you should have legal advice to back it up – you agree, right? I’m not out of order here, am I? But I spent 17 months chasing this answer that basically told me the SNP’s legal advice was non-existent.

“Why not just admit that in the first place? Why say it’s not in the public interest? What confidence does this give you in them?”

Raising the questions the SNP still had to answer, she continued:

“Alex Salmond may have been cleared of breaching the ministerial code, but this is still an issue because the the SNP hasn’t yet answered what legal basis their 2007, 2009 and 2012 documents – which all refer to an independent Scotland and EU membership, by the way – are based on if they are only now seeking legal advice.

“More MEPs are showing an interest in how the Scottish independence issue progresses – it’s so complex and could have strong knock-on effects for the rest of Europe. Catalonia, for example. So when some people claim ‘oh, you can’t talk about this unless you’re Scottish’, that’s quite disappointing.

“We need to fully embrace that we’re a part of Europe. I have a German name, an American husband and I’m Scottish. That’s the world we live in!”

Meanwhile, in Wales, first minister Carwyn Jones has attacked David Cameron’s Europe speech for playing into the hands of those looking to break up the UK.

Speaking of it having a “destabilising effect”, Jones explained:

“Undoubtedly, the prime minister’s speech has constitutional repercussions for the UK itself. It plays into the hands of those who want to break up the United Kingdom. Having a crude and unnecessary in/out referendum, sends out confusing signals to the Scottish people about the UK’s continued membership of the EU.

“As a consequence, this speech will have a destabilising effect on the future of the United Kingdom at a time when we can ill-afford it.”