George Osborne today told the cabinet there will be even deeper cuts if the Tories win the 2015 general election. 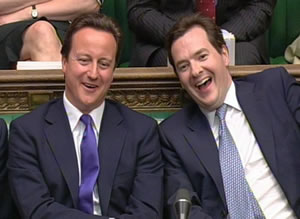 From “we’re all in it together” to “more with less” – get set for George Osborne to wheel the phrase out in the run-up to the next election, having told the cabinet today there will be even deeper cuts than those in this Parliament if the Tories win in 2015.

The news comes in the middle of a potential triple whammy of bad economic news, with the latest labour market stats out tomorrow and the latest GDP figures out Friday – both following today’s borrowing figures.

Details of the latest cuts will be announced in the spending review, to report in the first half of this year, with the chancellor ordering ministers to draw up plans for cutting departmental spending for 2015-16. Many more public sector workers face the sack – at the Department for Education, staff numbers have already fallen drastically under plans to cut its running costs by 50 per cent.

Some departments are set to face cuts of 40 per cent, while spending on schools, the NHS and foreign aid will be “protected”.

As the election nears, Labour will have to say if it accepts the 2015-16 departmental spending totals – which the Conservatives and Liberal Democrats will be committed to post-2015 – a debate the party needs to have sooner rather than later.