Carl Packman writes a letter to George Galloway, reminding him of his record as, to quote the the prime minister, a supporter of "brutal Arab dictators". 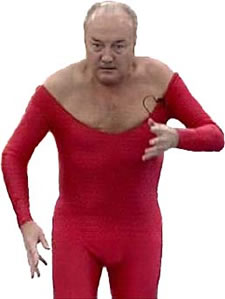 George Galloway has written to David Cameron following his humiliation at the hands of the PM at yesterday’s PMQs; here, Left Foot Forward’s Carl Packman writes a letter to the Honourable Gentleman, reminding him of his record as, to quote the the prime minister, a supporter of “brutal Arab dictators”

It was great to have you, the Rt Hon Member of Parliament for Bradford West, turn up to Prime Minister’s Questions yesterday. It is always nice to hear your contribution to the national questions of the day, and I’m sure your constituents are more than happy for that advocacy.

So it was to my great disappointment that our prime minister didn’t treat you to the answer you wanted. Though you yourself have form of avoiding questions.

Remember when you accused Dispatches and Channel 4 of “having a problem with Muslims” but refused to answer the question of whether you saw the programme on Born again Christians (which would prove Channel 4’s even-handedness) or the question of whether you could name the last vicar who publicly called for the stoning of women? Where instead you just kept deflecting and shouting at your guest to look at the Jews?

It’s here and it’s brilliant – a pity you ran out of time at the point when a man was laughing in your face at your reluctance to debate:

But actually, let’s talk about those “hand-choppers” and “throat-cutters” that you don’t support.

In 1994 you praised a man who was responsible for the deaths of some 200,000 Kurdish civilians, as well as a great many of his own people, who was known for his egotism, cruelty and morbid will to power, for his “courage, strength and indefatigability”. The same Saddam Hussein who won elections with 99% of the vote? He must have had very good election materials.

And didn’t you once say:

The same Nasrallah whose early spiritual guide was Ayatollah Mohammad Baqir al-Sadr, who Saddam executed in 1980? You must have very interesting dinner parties.

And Hezbollah. The same Hezbollah who have the necessity of the destruction of Israel written in to their manifesto, who glorify death and martyrdom, whose reason for being is to stand Muslims against Christians and Jews? It must have been very tough glorifying them as a Roman Catholic (back when you were).

In 2010 you gave a soft touch interview to a man, a leader of a country from another contested election, who funds terrorist groups like Hezbollah, backs groups like the Palestinian Islamic Jihad, with their proud history of suicide bombing, before calling him “his excellency”. The same Mahmoud Ahmadinejad who denies the Holocaust? You probably should have mentioned how disgraceful this position is.

I’m sure you wouldn’t let Nick Griffin or David Irving get away with it. Maybe your work with PressTV, which is funded by Iran, making Ahmadinejad your boss, held you back a bit?

You have been consistent in your support for one leader, who you have hailed as the “last Arab leader”, noted their independence (from Russia, Mr Galloway?) and their leader’s “reforming zeal”. The same President Bashar al-Assad who among other, countless atrocities, oversaw the throat slitting and killing of 32 children under 10 years old and 60 adults in villages in the Houla?

For anyone else it would be very difficult to stand by the words you uttered about him:

“Syria is very lucky to have Bashar Al-Assad as her president.”

I know of one Syrian I think you should consider when standing by your words about Assad – the pro-democracy activist Hamza Fakher who said at the start of 2012:

And it is those people who you have accused of being Al-Qaeda yesterday, those people who are fighting for their lives as your friend, President Assad, goes to the lengths he does to burn, cut the throats, torture and kill them – just to ensure his staus quo. You, Galloway, are that man’s foot soldier. And you should be ashamed.

I look forward to your reply.