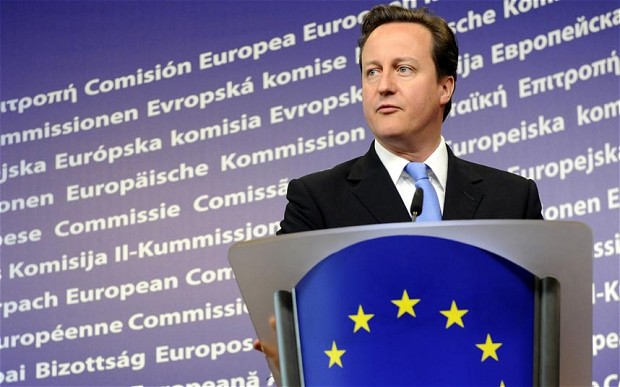 The forthcoming speech by David Cameron, set to define the Conservative’s long-term attitude to EU membership, is due soon.

Egged on by an anti-EU right wing cabal of the 2010 intake of Eurosceptic MPs, others fearing for their seats because of the recent bounce by the head bangers in UKIP, plus the anti EU media, Cameron is so far demanding unspecified ‘repatriation’ of powers, renegotiation of membership and looks set to hold a referendum in 2015.

Alarmed at these developments in the past few weeks, the CBI and other mainstream employer organisations have warned of the UK ‘sleepwalking out’ of the UK.

In his speech to the Fabian’s this weekend, Ed Miliband warned of the damage all this is doing and made Labour’s position clear.

At last week’s TUC meeting addressed by Labour’s Andrew Adonis, Andrew Churchill of the manufacturer JJ Churchill, the TUC’s Frances O’Grady and ‘Lord Hezza’, the Government’s advisor on economic growth, responded to a question put by myself on the damage to manufacturing that is being done by the posturing and rhetoric on the issue of the UK’s continued membership of the EU.

Lord Heseltine’s remarks got the most media coverage, deriding those who argue that the UK could somehow exist on the edges of the EU like Switzerland or Norway and those who argue we should concentrate exporting to the BRIC countries (Brazil, Russia, India and China) who would welcome our business if we were out of the EU. Heseltine said he wasn’t aware of any Brazilians sitting thinking – “good – the UK is out of Europe, lets do business with them”.

The Obama administration waded in as well warning of the dangers of a EU exit from the UK, Merkel’s team made it clear that they were fed up with being lectured – and even those countries disposed towards the UK now find it hard to accept that proposals endorsed by everyone else can be blocked, delayed and watered down by the UK threatening to throw its teddy out of the pram.

The EU is becoming weary of megaphone ‘noises off’ and harebrained comments from William Hague, Boris Johnson, Theresa May and John Redwood bouncing ideas such as the UK having “associate membership” which would see the UK lose its commissioner in Brussels and a seat at the table. It is farcical to believe the UK would retain our access to European markets and influence the development of the rules governing the EU.

This self-centred debate is damaging manufacturing in particular and creating uncertainty. Rightly or wrongly, it is strongly rumoured that Merkel killed the BAE Systems with EADS merger because of the uncertainty about the UK’s long term role. Others think this debate is a sideshow, distracting from the real problems of the Eurozone, the UK economy and manufacturing – especially as we are now facing the very real possibility of a triple dip recession and companies such as Honda can blame the drop in sales of cars in Southern Europe and put 1000 workers on the dole.

We also need to be clear that what the Tories are really talking about when they refer to ‘repatriation of powers’. They are not just talking about issues related to justice and immigration. We should not lose sight of the attack they will make on basic employment rights if we were outside of the EU. Nor do they like the social dimension that EU membership has brought. Out of the EU the Tories will force a  race to the bottom by dismantling basic employment rights.

These include rights to Information and Consultation; changes to employment rights for agency workers, fixed term contract workers and part time workers; EU legislation on young people; the Working Time Regulations which gives the right to four weeks paid holiday and the right not to be forced to work more than 48 hours a week; TUPE regulations which protect workers in companies subjected to take-overs and there are numerous equal pay and health and safety directives the Tories would like to ditch which benefit UK workers. (See my blog on European Employment Rights from November 2011.  Also worth reading is a letter in the Guardian from January 12th from Simon Sweeny of the University of York.)

The media and the Tories brush aside the fact that the EU provides 57% of our trade, has provided direct funding and grants for manufacturing companies in the past and have assisted with structural funding to areas hit by industrial change and decline.

There is much wrong with the EU at present, notably the austerity measures imposed on Greece, Ireland, Spain and Portugal. Even so, there is no clamor by unions in those countries to exit the EU.

We can expect the media and Eurosceptics to ratchet up anti EU sentiment.  Tory MPs and cabinet minister wedded to austerity and driving down employment rights will no doubt repeat the mantra that the failure to grow the economy is all down to Europe and the Eurozone.

This somnambulism and posturing by the Tories and the right wing media will, sooner or later, lead other EU member states to ask the question – make your minds up – are you in or out?