Kevin Meagher
4 December, 2012
A Britain We All Call Home

A change in Belfast city council's policy on flying the Union flag exposes old divisions and results in a night of rage in the city. 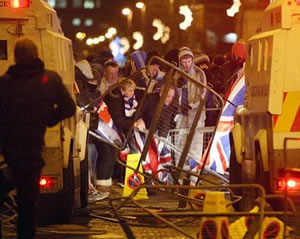 It is fair to say most council meetings don’t end in a thousand-strong mob storming the council buildings, or lead to a night of disturbances that manages to put police officers in hospital.

But then Belfast is not most places.

A consultation on the city council’s policy of flying the Union flag above council buildings began back in June. Currently, it flies over the main council buildings 365 days a year. However, with sovereignty the crux of the problem in Northern Ireland, flag-flying is especially contentious.

Two weeks ago Belfast city council’s policy committee recommended the Union flag should not fly. However, a majority of councillors at last night’s full council meeting backed a compromise amendment put forward by the Alliance Party to only fly the Union flag on certain designated days, a move commonplace in Britain.

As the BBC reported:

Some of the protesters who had gathered outside the city hall used metal barriers, bottles and golf balls to attack police…

There was an attempt to hijack a bus on the Albertbridge Road, and there are reports that St Matthew’s Catholic Church has come under attack.

Of the five [PSNI] officers who were hurt, two policewomen have been taken to hospital with injuries that are not believed to be life threatening. The Press Association (PA) also said that one of its photographers has sustained a head injury after getting caught up in the violence at the city hall.

Meanwhile, the Belfast Newsletter has footage of a mob storming the grounds of the city hall.

The Department of Culture, Media and Sport advises there are 22 designated Union flag flying days each year, but encourages government buildings to fly it all year round, although there is no instruction they should do so.

However, symbols of culture and nationhood are an increasingly divisive issue in Northern Ireland. Belfast city hall has long been seen by Irish nationalists as a totem of unionist power. Now that a majority of councillors are from Sinn Fein and the Social Democratic Labour Party (SDLP), 24, to 21 unionists, there is an impetus to redress the balance.

Another skirmish in this cultural battle concluded yesterday, as Newry council voted to retain the name of a local playground after Raymond McReesh, the third Republican hunger striker to die in The Maze prison in 1981.

Unionists had complained McCreesh, a former IRA gunman, was unsuitable, although only 16 per cent of local residents opposed naming the park after him back in 2001. It took until yesterday to finally resolve the matter.

Ironically, it is another flag, the Irish Tricolore, which was designed to represent both traditions in Ireland – green for Ireland’s Catholics and orange for its Protestants. Indeed, during the 18th and 19th centuries it was common for Protestants to lead efforts to secure an Irish republic.

“The white in the centre signifies a lasting truce between the orange and the green, and I trust that beneath its folds, the hands of the Irish Protestant and the Irish Catholic may be clasped in generous and heroic brotherhood.”

If last night is anything to go by, it is a sentiment that is still some way off.