John Millington looks at the racism suffered by Gypsies and Travellers, such as the boxer Tyson Fury, who often receives such abuse on Twitter. 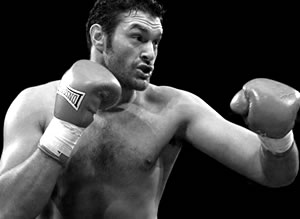 After enjoying catching up with all the boxing results last weekend, and looking ahead to Britain’s Amir Khan taking the stage against Carlos Molina this coming Saturday, I wondered what Manchester heavyweight star contender Tyson Fury was up to on Twitter.

I had heard of his prolific tweeting before and some of the more unsavoury things he has said about his likely future opponent, David Price.

I spent just half an hour taking a cursory glance at Fury’s own twitter comments. Depending on your taste and point of view, they ranged from funny, to offensive.

But what struck me more than his swipes at boxing promoter Frank Maloney, was the amount of anti–Traveller (Gypsy) abuse Fury received.

Fury has made no secret of the fact he is from a Traveller family and has every right to express how proud he is of where he comes from. But tweet after tweet directed at him ranged from overt racism to references about potatoes, and who was going to drive his caravan while he was in the ring.

One tweet was in response to Fury asking for topless pics as it was Christmas. Tasteless maybe, but it hardly justifies somebody posting themselves with their top off holding a sign saying “Pikey C**t” and tweeting that back at Fury.

Now you might say, Fury is a big guy and he can handle it; he seems to give as good as he gets on the Twittersphere anyhow.

But is that really the point?

The exchanges show anti-Traveller rhetoric is still seen as acceptable in Britain.

Media reporting of the mass eviction of the Dale Farm site in Essex this year showed the prejudice that still exists not just amongst sections of the press, but also amongst the public at large. And programmes like my “My Big Fat Gypsy Wedding” with its offensive posters which were criticised by regulators in October, help to make this kind of racism acceptable.

Words like “Gypo” and “Pikey” have been in common usage since I was at school in the mid 90s, and remain standard terms of abuse today.

Statistics for Irish Travellers in the UK do not exist, although in 2011, for the first time, the census categorised Romanies (including Roma) and Irish Travellers as distinct ethnic groups.

Recent estimates of Travellers living in Great Britain range between 15,000 and 300,000, and, according to the Gypsy Roma Traveller Achievement Service:

“Sadly, racism and discrimination have gone hand in hand with Gypsies and Travellers.

“Many Gypsy, Roma and Travellers are subject to racist attacks and name-calling, the withdrawal of services and refusal of admission to shops and pubs and so on. This is despite the Race Relations Amendment Act 2000, which has made all these things illegal.”

They go on to point out:

“Roma, Romany Gypsies and Irish Travellers are now all recognised to have protection under the Race Relations Act as they have been finally recognised as minority ethnic communities in law.”

So if Travellers are a race, why have the Tyson tweeters not been arrested for these racist tweets?

If Fury was a black boxer, and equivalent offensive language was being dished out to him in a public forum, there would rightly be outcry and the perpetrators arrested. But that is only down to the fact of massive anti-racism campaigns run over many decades.

Arrests have been made this last week over racist tweets towards professional footballers, and the whole Suarez/Evra racism saga has put racial and cultural prejudice into the sporting spotlight.

16 Responses to “Why is anti-Traveller abuse not seen as racism?”