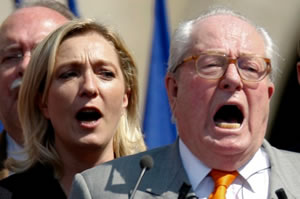 The far right party in France, le Front National, held its party conference over the weekend. Held at FN’s headquarters in Nanterre, the theme was about reviewing what they termed the “big failure” of the first six months of Socialist President François Hollande’s term in office.

The conference, however, was marred by allegations from the party leadership that a news agency, Agence France-Presse (AFP), were deliberately publishing “ugly” pictures of party leader Marine Le Pen and were banned from attending the conference.

“We’re not throwing a girly tantrum here. These pictures are so ugly that they border on outright insults. We’re convinced you are doing it deliberately.”

Unsurprisingly AFP refuted the allegations and claimed their coverage of Front National was fair and balanced.

Members of the European Parliament have immunity from criminal and civil liability for opinions expressed as part of their duties, unless the MEP’s vote to lift this. Le Pen is currently serving a second term as a member of the European Parliament. The possible prosecution is about a comparison she made in 2010 to Front National supporters, where she likened Muslim street prayers in France to the Nazi occupation.

Le Pen refutes this claim and says she is ‘simply a patriot’, telling Al Jazeera:

“I feel hatred towards nobody, but I have immense love for my people and for my country that I will defend in all circumstances.”

Le Pen succeeded her father and party founder Jean-Marie Le Pen in January 2011 and has been credited for the party’s good performance in the first round of the 2012 presidential election, where they gained 17.9 per cent of the vote, the highest share of the vote to date for the party. There is speculation Le Pen will put herself forward as a candidate to become the mayor of Nice in 2014.