What is the Iranian threat? Daniel Wickham looks at the validity of Israel's fear of Iran, the possibility of nuclear weapons and the parallels with Iraq. 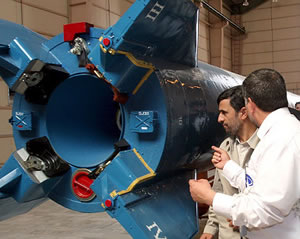 It’s funny how history tends to repeat itself. Ten years ago, the west was under threat from a brutal and unfriendly regime in the Arab world. Our leaders spoke of weapons of mass destruction, sanctions and war. We all know the rest. Almost a decade has passed since the US-led invasion of Iraq, and again the west and its allies finds themselves faced with another great threat in the Middle East. This time it’s the prospect of a nuclear Iran.

Again, our leaders speak with great certainty about weapons of mass destruction. In Iraq, they were never found, and probably, never existed. But even before the war, the IAEA, the UN and the Iraq survey group, had all made it quite clear – there was no hard evidence of WMDs in Iraq.

Nobody wants another Iraq. But a decade on from Operation Iraqi Freedom, the same script is being followed over Iran. Israel has repeatedly threatened the Iranian regime with a military attack if they continue to move towards developing nuclear weapons.

Just as Saddam Hussain did a decade ago, the Iranians promise retaliation, but make no threats of an unprovoked attack on Israel; evidently, a pre-emptive Israeli attack on Iran would greatly increase the chances of Iran then retaliating against Israel.

According to the former chief of Mossad, it would start a “regional war”. It has even been claimed by scholars and military experts an attack by Israel would speed up Iran’s move towards nuclear capability. And yet, despite these inherent risks, even the White House refuses to rule out a pre-emptive strike against Tehran. So what exactly is the nature of the Iranian nuclear threat, and should it have our leaders contemplating war?

If reports into the country’s horrendous human rights record are anything to go by, the regime is certainly a threat to its own people. But the notion Iran intends to launch a military attack against Israel if it successfully develops a nuclear weapon is not supported by western intelligence agencies. This year’s official Pentagon report claims Iran’s military doctrine is “designed to slow an invasion… and force a diplomatic solution to hostilities”.

The regime’s security strategy “remains focused on deterring an attack”. A more detailed Pentagon report in 2010 concluded Tehran’s first priority is “the survival of the regime” and its “military strategy is designed to defend against external threats from the United States and Israel”.

That same year, a US Department of Defense report declared Iran’s nuclear programme was “a central part of its deterrent strategy”. This implies a nuclear strike on Israel would not be the purpose of Iran developing atomic weapons. Instead, the report claims the programme would be designed to deter a US or Israeli attack. And this is far from just Iranian paranoia – both countries have threatened to attack Iran in recent months, violating Point 4 Article 2 of the UN Charter.

It should, of course, be noted the reports do point out Tehran’s reprehensible record of support for Shia terrorism. Their overall message, however, is clear: Iran is a hostile country, but its core military objective, including that of its nuclear programme, is defensive. This is not to say Iran would be justified in developing a nuclear bomb, but if US intelligence is accurate, and the programme is in fact designed as a “deterrent” to invasions, then a nuclear Iran would not pose an existential threat to Israel.

The same conclusions have been made by Israel’s former military intelligence chief, Zeevi Farkash. He believes the regime has no interest in using the atomic bomb against Israel; it would serve simply to deter a US attack. Such is the view of the acclaimed Israeli military historian Martin van Creveld, who argues  an atomic weapons programme in Iran would bring stability to the region, “just as nuclear weapons kept the peace between the US and the Soviet Union during the Cold War”.

The threat of mutually assured destruction would, in van Creveld’s view, deter war and encourage diplomacy between the two countries.

Current Mossad chief, Tamir Pardo, has also stated a nuclear Iran would not pose an existential threat to Israel. His predecessors, Meir Dagan and Ephraim Halevy, argue the same. Halevy even accused his government of exaggerating the Iranian threat in order to win the support of the international community.

So where, one might ask, does president Netanyahu get his intelligence from? If a nuclear Iran really would pose a threat to Israel’s existence, why do the leaders of Israel’s top intelligence agency refute this so strongly?

Netanyahu has even warned of a second Holocaust. But again, there is little basis for such a claim. The Iranian leadership has never called for genocide, or tried to exterminate the Iranian-Jewish population, so why do we assume the regime would even want to launch a nuclear attack on Israel if it got the chance? Undoubtedly, Iran’s leadership is grossly anti-Semitic and authoritarian. But to claim it would want to carry out a second Holocaust is a big leap; and, not to mention, completely at odds with the reports of the Pentagon and the US Department of Defense.

Our leaders appear to have their own intelligence. Obama doesn’t buy the claims of Mossad or the Pentagon – he told the UN this year a nuclear Iran is an existential threat to Israel. Nor would he appear to have much faith in the IAEA, UN or CIA, none of which have found any hard evidence of an atomic weapons programme in Iran. Sound familiar? Saddam’s weapons were never found, but to our leaders, it would appear Iraq is nothing but a distant memory.

Yet if we learnt anything from the chaos of that conflict, it’s that diplomacy should never be sidelined and our leaders should always be questioned. But as evidence on Iran is ignored, and talk of war intensifies, we are in danger of making the same mistake again and thus fulfilling the age-old cliché – that those who do not learn from history will be condemned to repeat it.

40 Responses to “Comment: Iran, nukes, Ahmadinejad… What is to be done?”