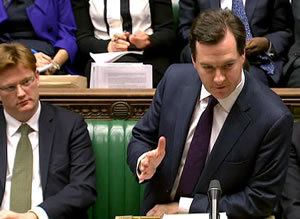 Despite the economic expansion in Q3, it is becoming increasingly evident the recovery was based on one-off factors.

In fact, the latest economic indicators suggest Britain may be heading towards a triple-dip recession. In particular, the closely monitored CIPS indicators show the pace of growth came to a halt in November with a surprise contraction in the construction industry alongside a continued decrease in manufacturing activity and a worsening service indicator.

Adding to the bad news, retail sales fell by a greater than expected 0.8% in October; manufacturing contracted by 1.3% in the same month; and inflation made its way back up to 2.7% following a drop in September. Measures to stimulate the economy have thus far proved ineffective, with the Bank of England itself questioning the impact of its own quantitative easing programme on the economy.

It is therefore unsurprising the Office for Budget Responsibility has revised downwards its GDP forecast for this year and for every year out to 2016. The independent body now estimates economic growth at -0.1% this year, down from 0.8 %. All in all, the UK economy still remains fragile with commentators coming to a consensus GDP is likely to contract in Q4.

This year’s autumn statement saw the chancellor announce a series of measures designed to keep Britain on track to eliminate the fiscal deficit.

The chancellor remains confident he is on course to meet his first fiscal rule: to achieve a cyclically-adjusted current balance by the end of the rolling, five-year period. However, given the rolling nature of the target the deadline has now been extended out to 2017-18. In the 2010 spending review the target was set to be met by 2014-15; this has now slipped by a further three years.

The second fiscal rule, which promised public sector net debt as a percentage of GDP to fall by 2015-16, is likely to be missed. Despite the change of plans in timing, the chancellor announced borrowing will fall in every year for the rest of the coalition’s time in parliament.

The UK economy experienced an expansion in Q3, which the chancellor credited as a consequence of growth stimulating measures implemented by the government; however the OBR revised its growth forecast for the full year down to -0.1 per cent. Given this downward revision, the autumn statement was surprisingly light on demand side measures to boost the weak UK economy and heavy on measures to meet its fiscal rules.

In fact the coalition government is geared to extend its austerity programme further with additional deficit reduction measures including departmental cuts in 2015/16 to 2017/18. Following this announcement it is clear Mr Osborne continues to put faith in expansionary fiscal austerity, despite already facing fierce criticism for this approach in some quarters.

Although, in an attempt to directly boost growth, the chancellor announced an extra £5 billion will go towards investment, initial estimates suggest this will do little in the way of substantially boosting GDP.

Preliminary GDP estimates show the UK economy has emerged from the recession with the strongest growth rate in close to five years. However, most of the growth is explained by one off measures – the Olympic Games and the ‘bounce-back’ from the extra bank holiday in Q2. Ticket sales from the Olympic Games may have contributed close to 0.2% of GDP.

Employment continues to improve, but there was an increase in numbers claiming JSA:

The employment rate rose to 71.2 per cent, with 100,000 new jobs created in the latest three months to September. Although this may appear as good news, there are still areas of concern. A closer look at the official figures suggests the employment picture isn’t as rosy as it may first appear. For example, although latest figures suggest employment continues to improve the number of people receiving jobseeker’s allowance rose by 10,100 last month.

The pace of job creation has also slowed down with the number of jobs created over the latest three months lower than those created in the last three months to August.

Unemployment experiences modest drop to 7.8% in the latest three months:

October saw consumers cutting back spending on food and clothing, with volumes purchased down by 0.8% over the month. This comes as a surprise to analysts who were expecting a less marked decline in sales. Consumers are expected to continue holding back their spending as inflation creeps back up. This dip makes it less likely the economy will continue to grow in the last quarter of the year.

Consumer confidence bounces back in November:

Consumer confidence rose to an unexpected 18-month high – though the boost in confidence could be short lived especially if the UK economic recovery is temporary.

The purchasing managers’ manufacturing survey shows a slight improvement in manufacturing activity, rising from 47.3 in October to 49.1 in November. Despite this modest increase, the survey remains below the crucial 50 level, indicating the sector shrank for the fifth consecutive month.

The service sector index also fell, with the index dropping sector to 50.2 from 50.6 in October, reflecting low consumer confidence in the economy.

Price inflation jumps back up to 2.7%:

This is the first hike in CPI since July. The increase in university tuition fees was largely responsible for the rise in inflation to 2.7%, up from 2.2% in September. Education costs increased by 19% over the month – the biggest month-on-month rise since records began. Although many commentators expected inflation to rise towards the end of the year, the jump was higher than anticipated. This sharp rise in costs may mean a triple dip recession is more likely over the winter.

The cost of living is expected to continue to rise with the cost of food and energy bills increasing over the coming months. This is particularly worrying for many working households where prices are outstripping wages – reducing their real incomes.

Total pay in the latest three months has risen by 1.8% compared to the same period last year, while regular pay is up 1.9%. However, the modest growth in incomes is yet to match the rising living costs – latest figures estimate inflation at 2.7%, placing greater pressure on household incomes.

On the latest month, exports increased by £0.3 billion. This was an unexpected rise given the continued eurozone crisis, and following the drop in August. However, month to month data is often quite volatile and as a result not the best indicator of trends; quarterly data on the other hand is less volatile. On this measure the volume of exports rose by 4.1%, with an increase of £0.8 billion to EU countries and an increase of £1.1 billion to non-EU countries.

Despite the positive news, analysts remain wary this will continue, as the EU falls into recession and the global economy remains subdued.

Borrowing in October was £8.6 billion, £2.7 billion higher than October 2011. Adding to the disappointing figures, cumulative public spending up to October 2012 has reached £73.3 billion – this is £5 billion more than the same period last year (April – October 2011). These poor figures make it all the more likely the government will overshoot the OBR forecast for the year.

The Monetary Policy Committee left interest rates at 0.5% in October and the scale of quantitative easing at £375 billion.

One Response to “Economic update – December 2012: Triple-dip ahead?”