Yvonne Ridley, the Respect candidate in the Rotherham by-election, has a long and visceral hatred of Israel, Zionism and Zionists, and is a supporter of Hamas. 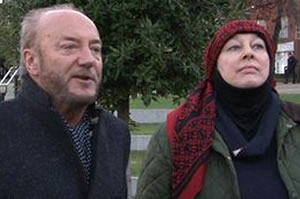 Yvonne Ridley, the Respect candidate in the Rotherham by-election, has a long and visceral hatred of Israel, Zionism and Zionists, and is one of the UK’s more vocal supporters of Hamas and apologists for Al-Qaeda.

Ridley is one of George Galloway’s closest allies, and will join him in Parliament if she wins the Rotherham by-election.

It is a prospect that should worry everyone.

Here are some of her most chilling statements over the past few years:

Report of a Ridley lecture at Imperial College, 2006:

Ridley said: “[Respect] is a Zionist-free party… if there was any Zionism in the Respect Party they would be hunted down and kicked out. We have no time for Zionists.” She explained that government support “goes towards that disgusting little watchdog of America that is festering in the Middle East”.

She went on to attack the Tories and Lib Dems, saying that all the mainstream parties are “riddled with Zionists”. I found it hard to comprehend how the notion that “[Respect] encompasses a broad church of ideas and opinions” could be compatible with the hunting down of supporters of an Israeli state.

Also in that Imperial lecture, she says:

“Israel is a vile little state. It’s propped up by America. It cannot survive without American money.”

“Anyone who knows me and why work know I loathe the Zionist State and what it stands for.”

“Drinking Coca Cola is like drinking the blood of Palestinian children.”

“The Zionists have tentacles everywhere. We’ve seen with the disgraceful behaviour from the BBC that this interference goes right to the very top of the media, into the very heart of our homes.”

At the same meeting:

“We have to end the Zionist state. We’ve got to charge the war criminals. We have to boycott Israeli goods.”

“I, now, here, on behalf of myself, my sister Yvonne Ridley, and the two Respect councillors – Muhammad Ishtiaq and Naim Khan – are giving three cars and 25,000 pounds in cash to prime minister Ismail Haniya.”

Ridley herself confirming she personally donated money to Hamas in a deliberate violation of sanctions law:

“I brought cash and I am happy to say I have given that cash to George Galloway and we have both given that money to the Palestinian prime minister, Ismail Haniyeh, which has broken UN sanctions. If they want to charge us, if they want to arrest us, bring it on.”

“During our brief time in Gaza, I did have the privilege to join a few of us together to meet Ismail Haniyeh… If I could use my Palestinian citizenship, it would be to vote Ismail Haniyeh and Hamas back in again in Gaza. Victory to intifada 3! Victory to Hamas!“

• Regular presenter on Press TV, the English-language propaganda arm of the Iranian government.

• She is the patron of Cageprisoners, which openly supported al Qaeda preacher Anwar al Awlaki right up to the terrorist attack at Fort Hood in November 2009.

• She wrote an article in which she sought to justify al Qaeda bombings in Amman, Jordan and expressed her preference for the al Qaeda terrorist, Abu Musab al Zarqawi, over the Jordanian royal family.

• Chechen jihadi leader Shamil Basayev was the mastermind of the Moscow theatre siege and the horrific attack on a school in Beslan, Russia. When Basayev was killed in 2006, Ridley said the news made her “sad” and she called him a “shaheed” (Islamic martyr) in an admiring article.

“Osama was, after all, no Hitler, Pol Pot, Idi Amin, Stalin or Caligula – he headed no country nor ruled over a state; and in fact the last few years of his life have proven to be extremely reclusive, secluded and isolated…

“That the most powerful man in the world can stare straight into the cameras and say: “Justice was done” over Bin Laden’s murder borders on absurdity.”

“The true Barack Obama is an out of control psychopathic killer with a loaded God complex, and he’s running America. This makes him the most dangerous man in the world as well as the most powerful.”

“That self-serving, vain pipsqueak, foreign secretary David Milliband, who trampled over the dead babies of Gaza to stand shoulder to shoulder with Israel… Milliband is a gutless, little weasel who lost more than his foreskin when he was circumcised.”

That there is a chance such a nakedly anti-Jewish, West-hating terrorist sympathiser with close links to the regimes in Tehran and Gaza could be elected to Parliament is a warning for Labour to learn the lessons of Bradford West, when the equally anti-Zionist, pro-Hamas Galloway got elected.

Its sizeable Muslim population lives mostly in the central part of the borough which is being contested. The Respect party, which has largely centred its electoral offering around appealing to Muslim voters, is already putting in the shoe-leather. Respect also now has a base in Bradford, less than an hour away, and if they are not sending activists every other day to leaflet in Rotherham, it’d be very surprising…

MacShane’s work on anti-Semitism and his former leadership of Labour friends of Israel makes the seat the ideal venue for a “global American-Israeli conspiracy” story against Labour. No prizes for guessing which party is likely to suggest that story in their campaign: one supporter of Respect candidate Yvonne “tentacles of Zionism” Ridley has already been tweeting about that “Zionist Denis MacShane”.

And Respect are not the only ones with a long-standing grudge against MacShane: back in 2010, long before his resignation, MPACUK (Muslim Public Affairs Committee, one of a number of questionable organisations which purports to represent British Muslims) was calling him an Islamophobe and encouraging a sectarian vote against him. For the record, MPACUK also has one of its four core principles “reviving the obligation of Jihad”. Nice.

• The sick anti-Semites at the heart of Galloway’s band of bigots – Carl Packman, March 30th, 2012